Of all the elements of music, the kick and the bass often seem like they’re the hardest to get right. Rookie producers often compare their tracks to others’ only the find them lacking in the weight, power and solidity that today’s commercial tunes have in spades. So why is the bass end of music one of the hardest things to get right in your DAW?

Other regions of the frequency spectrum are a lot easier for us to deal with. Consider the ranges that the human voice dominates – everything from 100Hz upwards, right to the top of the frequency range, with different focus points in between, depending on the speaker and what they’re saying. Our human hearing system has evolved to pay a lot of attention to the ranges where the human voice lies.

What we haven’t invested so many evolution points in, though, is the bass and sub bass end of sound. The lowest frequencies haven’t been so important in keeping us alive, and we certainly don’t hear them every day in nature. So the low end of music continues to evade us.

The Importance of Bass

The very bass end is the foundation of musical power. Get it right and you have a heavy, hard-hitting and polished piece of production; get it wrong and you have have a weak, unfocussed mess. Listeners will sense there’s something wrong, but they won’t be able to put their finger on what; fellow producers will sympathize, having had the same problem.

It seems that the one frequency range we’re not used to dealing with is often the most important in making things sound good. Who knew?

In this article, we’ll explain why some of the Kick and Bass Mixing Tips that we explored in our article work, from a more scientific perspective.

Bass is Slow, Music is Fast

The actual sound waves created when bass is produced are very low-frequency, wide-wavelength, and take some time to move from their lowest to their highest excursion – that’s just the definition of bass, it’s what it is! The image below, with a lower-frequency, bass wave in red, and a higher-frequency wave in blue, helps to show this.

This ‘slowness’ of bass (the sound waves aren’t slower at all – they’re just slower to change) means that anything we do that amends that waveform will be more disruptive to how it sounds. What may sound like a momentary blip on a higher-up instrument might make a deeper, bigger impression on a slower, unwieldy bass wave.

Masking is something that actually occurs in our perception, rather than in the real world. When two musical frequencies are the same and play at the same time, we may not be able to tell which is from one instrument and which from another. Next, if two frequencies play together and are very close in their Hertz value, the louder and lower can mask the quieter and higher frequency.

In another phenomenon, if two instruments are playing the same notes, they’ll be more likely to blend into one. This is a good thing if you’re composing for a symphony orchestra, but if you’re an audio engineer mixing a piece of music where every instrument must be hear properly, it’s going to be a bit of a headache.

This final situation is something that affects kick and bass mixing, with the bass note and the highest-energy frequency of the kick drum often sharing very similar notes – or at least the same octave. With the two presenting themselves at the same frequency, there’s a huge likelihood for them interfering with each other, cancelling each other out, and becoming less and less powerful as individuals, thanks to the combination of the two.

To avoid masking, one of the most effective things you can do to your kick and bass is to tune them out of each others’ way. With one safely tuned into a lower octave, and another into a higher one, they’ll be nicely separated, and we can hear both existing together. One thing to remember here is the way that kick drums function.

Acoustic kicks may have multiple low-frequency volume components, depending on the tuning of the drum’s two skins, and how it was recorded. Electronic kicks will usually be formulated using a pitch sweep from high to low, with a defined start and end point. Usually, the electronic kick’s end-point will bear the most weight on the perceived ‘tone’ or ‘pitch’ of the kick drum sound itself. 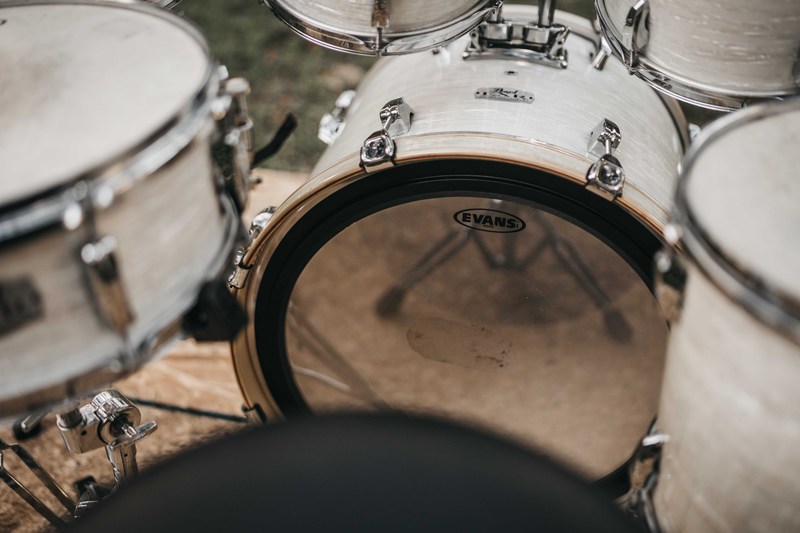 If you can tune the kick in a sampler, drum machine, or simply using your DAW’s pitchshifting functions, it may be easier to do that to retune an entire bassline.

But with so many moving parts between kicks and basslines, perhaps the best way to tune the two together to ensure each is clearer, is to make sure you’re using your ears. So many factors are at play that, as long as you feel it sounds good, it probably does.

Consider a synth. When you change the waveform from a sine wave to a square wave, two things happen. First, the waveform changes to a flatter shape, and second, the number of harmonics increases.

If you look at the change in waveshape on an oscilloscope, you’d see a change in the wave cycle; if you looked at it happening on a frequency analyzer (as below), you’d see extra harmonics added higher up the frequency spectrum. 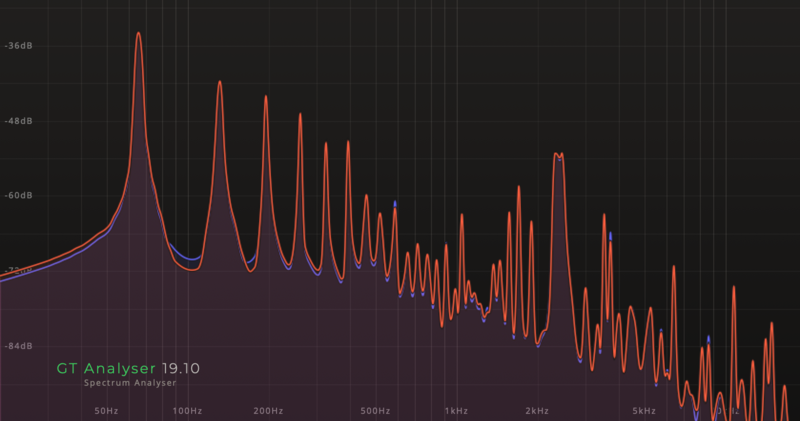 Now consider what happens to a bass signal as you compress it. When the wave rises to a certain threshold, it will start getting reduced in level, and the waveform will flatten out to an extent. This changing of the waveshape has a consequence to the frequency spectrum, and the result is exactly the same as what we saw with the sine and saw waves: extra harmonics: distortion.

In practical terms, this means that if you compress a bass sound too heavily – and with fast attack times set on your compressor – it’s likely that you’ll cause distortion to be introduced on the bass.

Small Speakers are Bad for Bass

We may take pride in our high-level studios, surrounded by expensive monitoring equipment and acoustic treatment, but most people listening to our music don’t actually have those things. Some of the most popular playback devices of today include mobile phone speakers, computer speakers, portable bluetooth speakers and other low-quality gear.

With a large proportion of your audience listening to your music through substandard playback equipment, what are the implications for kick and bass? 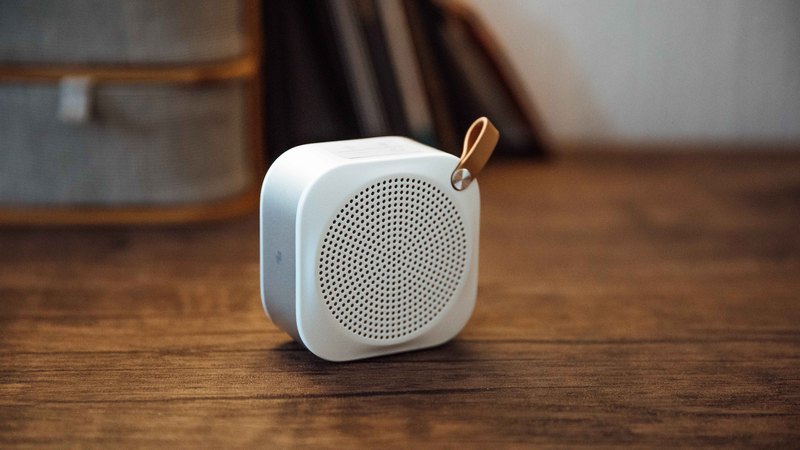 These speakers are often low quality due to their size, and a small speaker will always find it very hard to properly reproduce low frequencies such as those needed for bass. Anything approaching ‘correct’ bass reproduction will likely be a poor simulation attempting to fool the ear.

There’s something you can do to help the folks listening to your music on small speakers, though. By adding extra distortion or saturation to your lowest frequencies only, thus encouraging harmonics to be generated higher up the frequency spectrum, this will give listeners’ ears a larger ‘impression’ of the original, weighty bass frequencies to grab onto.

When listening on smaller speakers, these lowest frequencies won’t actually be present, but their boosted harmonics may make them appear so

By saturating or distortion only our lowest bass frequencies, the harmonics produced from these will be related to those frequencies, and a listener’s brain will ‘fill in the blanks’ of the lowest frequencies. When listening on smaller speakers, these lowest frequencies won’t actually be present, but their boosted harmonics may make them appear so, or at least give the whole mix the impression of a good solidity.

Will they Notice Retiming?

One of the pieces of advice in our Kick & Bass Mixing Tips piece was to make the bass come in slightly later. This is a foolproof way to separate both your sounds, but it’s also the one that could go the most wrong if it doesn’t work entirely properly. To add complication, retiming an entire bass track gives you the kind of situation where you can get ‘used to the groove’, and not realise that something doesn’t sound quite right after a while.

By moving your bassline and kick sounds literally out of each others’ way a tiny bit, so that your kick has time to finish its cycle before your bass comes in, the two will be heard at different times. But if you move the bassline too far forward after the kick, you’ll risk a hugely noticeable difference between the two.

This is something that only your ears can truly tell you, but if you can get away with this technique thanks to the unique groove of your music, it can be one of the most effective ways to get your kick and your bass to sit together nicely in the mix.