FeaturesPlugin SuitePlansTutorialsBlogSounds
James Hurr, the electronic music producer on finding balance in music and life.
16 Jul '2021
James Hurr: “I think that the modern mode these days is that hybrid electronic yet organic sound”

A busy work schedule is either a sign or a symptom of a successful career, depending on which way you look at it. Hard work pays the rent, but it also takes its toll in other areas, and for prolific electronic music producer and sound engineer James Hurr – a man with releases on labels such as Spinnin, Armada and Toolroom; sample packs on Splice and Loopcloud; his own record studio (AUX Studios); and commercial clients such as Wimbledon and Ninja Tune – it started to feel like he was taking too much on.

“Before the pandemic I was working 12 hour days in the studio, and had an endless list of things to do. I was getting a bit stressed out by it all because I was taking on too much, and wasn’t able to enjoy it as much as I should have.”

With the global slowdown affording him the space to reevaluate how he uses his time, as well as opportunities to build his brand and make plans for the future, Hurr is in a better place now than ever before. Rather than prioritising everyone else around him, the Surrey native fine-tuned the balance in his own favour, adding variety to his work routine and reclaiming his enjoyment of the thing he does best – writing and producing great music.

We caught up with James to chat about the different kinds of projects he’s taken on since then, his work environment and processes, and what he’s got planned for the future.

Nice looking studio, how long have you been there?

"Thanks, it was only built in December! I found it on Gumtree, it was this big, open space that was rented out to artists before the pandemic, but the building owners were in a band and had all their gigs cancelled so they decided to turn it into a recording studio. I came in to have a look when it was just a wooden frame really, but I made an offer immediately. The space looked perfect to me, and it's close to home as well." 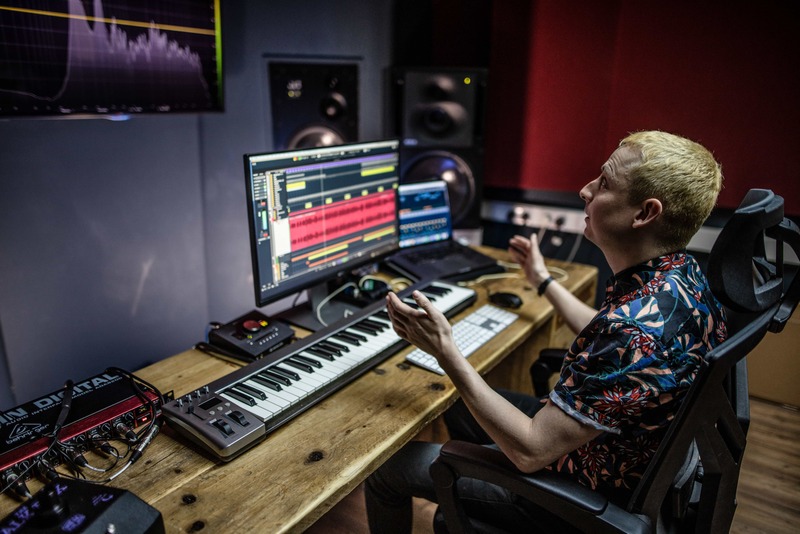 I’m in the studio a fair bit at the moment again, because I’ve recently had a TV advert come in for Wimbledon. It was a pitch for a hybrid classical track, like Walter Murphy's version of Beethoven's Fifth in the film Saturday Night Fever. I thought it looked like a fun one to do, trying to take a huge classical arrangement and turn it into something modern. Now it’s in the final round, which is where the agencies come back with their feedback. I'm praying I get it!

Have you always worked with agencies on commercial projects like that?

Interestingly enough, before the pandemic hit, I was probably only doing agency work about 10% of the time. Previously I worked for a music supervisor in Soho called Native, and they'd send me briefs every now and then. After the pandemic came along though, I had loads of contacts built up and I realized I'd done some work for Ninja Tune years ago, through another company. I hit them up and asked if they needed help with anything or if they had any briefs. Luckily they decided to try me out, and now I'm doing a whole album of Motown and soul for them. I did some rock and hip hop style stuff for them too. It’s great because that’s actually a direction I wanted to take – learning to use more live instruments, orchestral sounds, and working with quality session musicians.

When you’re writing your own tunes do you prefer to use live instruments and singers or sample packs from Loopcloud or Splice?

I'd generally rather use musicians, but I don't always have the time. I’m lucky though because I’ve got a good group of connections who understand the right attitude for working in dance music. They're always flexible, and they don't want the final say all the time. In the early days, it was more difficult and took longer to work with musicians because of conflict. Samples have always been my go-to because of that; it just saves time. I’d estimate 90% of my clients bring in stuff made purely from loops and sample packs off Loopmasters or Splice, and then we replace those samples by playing live. That's the genesis of nearly every production.

What is your workflow like when it comes to the actual process of putting the packs together?

It varies from pack to pack. The Splice Mark Knight pack (Trademark Series - Mark Knight) for example, involved mostly stripping all the elements from previous projects and then rearranging and reprocessing them. For the larger packs there’s a lot of editing and treating it like you’re producing a track each time, but not worrying about the arrangement. We’d make a killer groove, then look at how the sonics of it worked and make it more interesting.

When it comes to starting from scratch I view it as a blank canvas. If I want to make some cool loops by just dragging bits and pieces from everywhere, I’ll sample old records and manipulate them. Old funk records, rare stuff from the 70s, Nigerian funk records; you name it, just weird things for snare sounds! It's great to have something like that tucked away at the core of the track, rather than just drum machines. When I’m making most of my loops there's an element of a drum machine – high hats, snares, or claps off an 808 or a 909 – underpinning the colorful, more interesting sound on top.

I suppose that makes a track more suitable for a club or loudspeaker context?

Yeah, definitely. I think that the modern mode these days is that hybrid electronic yet organic sound. It’s about trying to get that balance where there are enough harmonics and interesting dynamics in the loop to make it feel organic, but at the same time having the weight of something electronic and heavily synthesized underneath. I like to do mixdowns for people, and I find there's a science to it.

On the one hand, you’ve got things that are all electronic, all very hard-hitting, but they don’t sound real. Whereas on the other hand you can use all these beautiful-sounding organic drums, guitar, or whatever else, but the track just doesn't cut it when it comes to being played in the club, or on the radio.

Are there any particular processing techniques you use to help get that effect?

I like distortion. I always use a multiband distortion plugin called Quadra Fuzz on Cubase, where I’m usually distorting the high frequencies to give a bit of sizzle, and maybe putting saturation on the mids as well. That instantly gives things more of a huge sound, especially on drums in dance production.

I use envelope shapers on a lot of sounds too, to bring the attack down or make it slower. The transients of digital samples often aren’t acoustically accurate compared to how sounds work naturally, so some processing is needed to make them believable. Sometimes I’ll add white noise to the transient for definition. Whenever sounds are recorded there is always an element of noise that creeps into the signal, so sometimes you need to put this noise back into digital samples, as they are often cut right to the transient.

Is this something you learned yourself or were you inspired by a mentor?

I’ve been producing for about 20 years now, so it comes from experimentation and trying to work these things out. Over time my ears have become tuned to the kind of sounds that I think work, and become more aware of sonic elements I’m opposed to. A lot of trial and error, and comparing my own sounds to other waveforms.

At the same time though, don’t be afraid to ask experts for advice! I used to get a lot of tips and information from Wired Masters, a mastering studio in London. They taught me about using de-essers to take the harsh clicks and pops out and make things sound more analogue. I noticed that when you take out the harsh high frequencies and popping transients it creates a much smoother sound.

You mentioned your sample pack work for Splice, but you’ve also recently released a sample pack on Loopcloud called Toolroom Tech House. That pack was made in collaboration with Mark Knight and Seige, how did the process work between you all?

It was a collection of bits from all of us. We looked through our projects together and pulled out the bits we liked. I wanted to make something to help other people and give them a tool to make their tracks sound better, or more groovy. Some are more complete where others are more rudimentary. 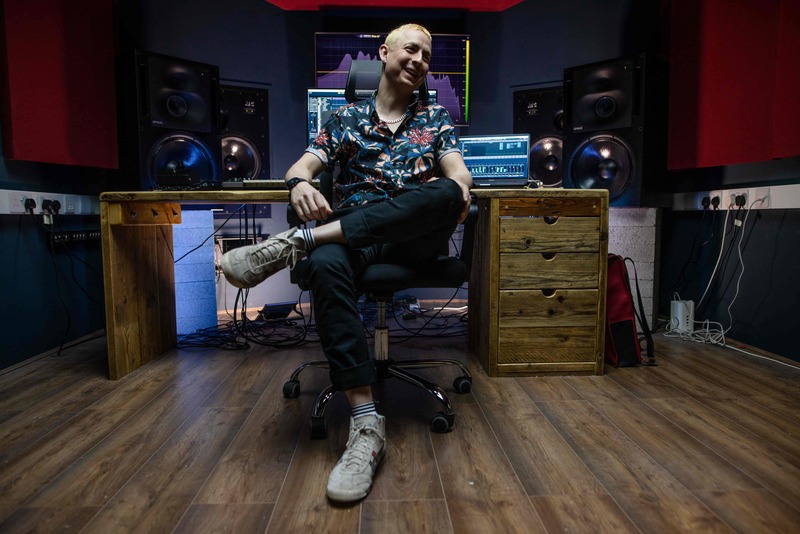 As someone who mixes for other people and also releases music yourself, do you find it hard switching between the two mindsets?

There is definitely a crossover. I think about it like putting on different hats: the producer, the mix engineer, the performer etc. They each have their own style and different nuances. You have to get your head around the varying output rates. Everyone works differently so sometimes I’ll be bouncing off other people, and other times I’ll be following their direction more, if the ideas aren’t directly aligned with my tastes. It can be hard to stay on task because you get wrapped up in the excitement and rush of creativity.

I think it’s really important to work with others, because it gives you a better view of the creative process. I'm currently working with quite a few different people. I work with a guy called Danny Harrison who has produced hundreds of massive records. He was in 187 LockDown, and he used to be on Defected. We also do Moto Blanco together, which is a remix team. In the past year I've been working loads with Paul Harris doing disco remixes and Italo Disco inspired house, and we're doing this thing called Harris and Hurr.

What is your vision for the next year or so, and what releases do you have coming out?

I went to the Grammys in 2020 and it blew my mind. I want to move more into that commercial realm and make more connections, without losing my underground roots of course. I'm really enjoying writing songs, and that’s getting noticed which is nice. Above and Beyond and Armin van Buren have been playing our tracks, and coming from a house background that was huge for me. I’m aiming to get more of my original productions on radio and get chart productions that will reach a wider audience. I'm lucky to work with passionate people who love what they do and put all their energy and emotion into it. Any days where I work with people like that are great.

I’ve got loads of releases coming out. Recently, Loyalty on Perfect Havoc with Anton Powers, Tobtok and Adam Griffin. I produced it and wrote it with them a year or so ago and it has Alex Hosking – an amazing singer – on it. Last month, Jump In with Michael Gray came out also on Perfect Havoc, and Love Together with Tasty Lopez has just been released on Toolroom.

Toolroom Tech House is available now on Loopmasters and Loopcloud