FeaturesPlugin SuitePlansTutorialsBlogSounds
How to use the Pattern function in the Loopcloud Editor to Transform Samples
6 Jan '2022
The Loopcloud desktop application comes with a plethora of effects and sample editing tools that you can use to manipulate and transform samples before you even buy them.

You can stack up to eight tracks, each loaded with a different sample, apply effects, perform sample manipulation and then export the final mix all without leaving Loopcloud. This means you can play around with samples before you buy them. Check out how Rodriguez Jr. used this feature in his 8 Track Attack.

One of the most creative sample editing tools in Loopcloud is the Pattern Editor. Acting almost like a sequencer, the Pattern Editor comes with a bank of presets so you can quickly create patterns and loops with one-shots – for example, you can create complex hi-hat patterns, melodic arps, and kick patterns for any genre. Alternatively, you can get creative and experiment with all kinds of sounds. In this article, we’re going to explore the possibilities the Loopcloud Pattern Editor provides.

We’ll start by writing a trap beat in the style of Drake and 21 Savage collaborators Metro Boomin.

First, we have to find the sounds we want to use. Loopcloud makes it very easy to filter by genre and type of sample, so this is very easy. 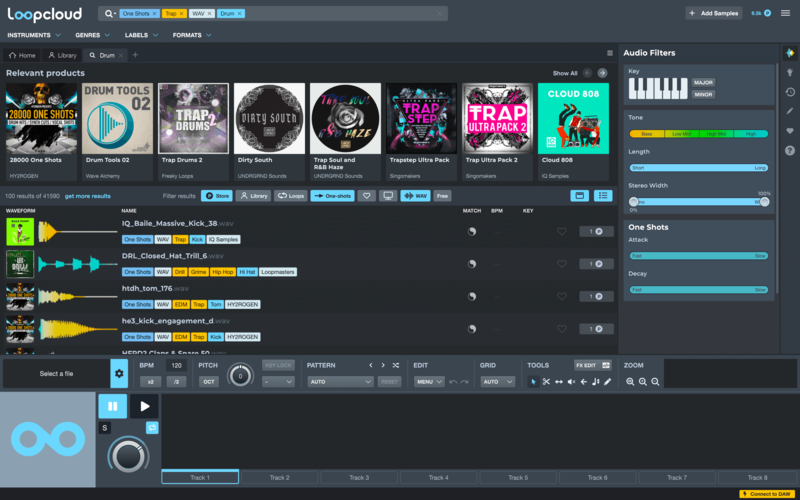 LoopCloud lets you layer up to eight tracks in the desktop app so you can experiment and start building loops without having to buy any samples. We’ve loaded a snare from 28000 One Shots by HY2ROGEN and a hi-hat from Explosive Hybrid Bass by Vocal Roads.

Now let's build a drum beat. We’ll start by creating a pattern for the kick.  Each track has a pattern editor which is packed with genre and instrument-specific presets. Open it and go to Kicks > Trap. You can also quickly cycle through the pattern presets using the arrows in the preset section.

Once you’re happy with your kick pattern, repeat the process for the snare and hi-hat tracks.

Finally, we can add a simple melodic loop to flesh out the beat into more than just drums. A reversed melodic loop works well and is similar to the original Metro Boomin track.

Time to turn our attention to house, where we’ll write a beat in the style of Laurence Guy.

Let’s find some dusty drum samples that would sound at home on a Laurence Guy track and load each one onto a separate track. We’ve gone for a kick and closed hi-hat from Analogue & Modular Techno from UNDRGRND Sounds, an open hi-hat from Future Funk & Soul by RV Samplepacks, and a snare from LoFi Deep House by RV Samplepacks.

Of course, when it comes to house, you can’t go wrong with four on the floor. You’ll find this classic kick pattern in Kicks > House, and a traditional off-beat snare rhythm in Snares and Claps > House. 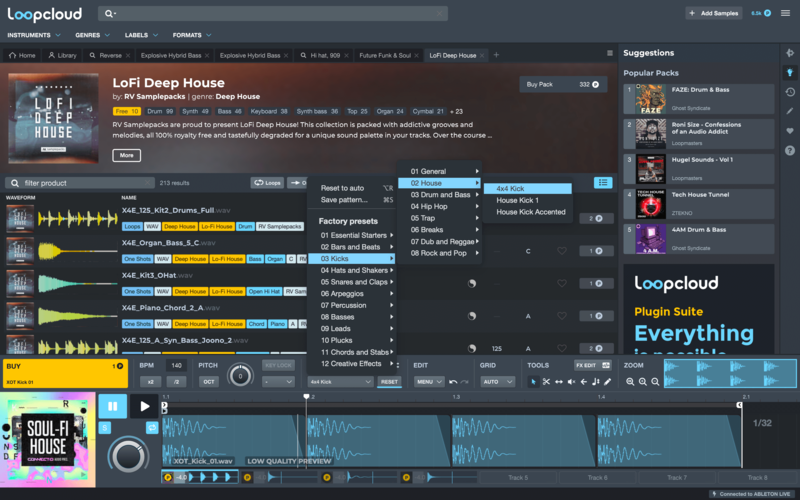 We’ll search in the same folders for the hi-hats.

Of course, like all great creative tools, unexpected and inspiring results can be achieved when you use Loopcloud pattern editor in unorthodox ways. Pattern editor is really designed to be used with shorter one-shots, but let’s see what we can create with longer samples and loops.

One way we can use Loopcloud pattern editor is to create a UKG, jungle, or house style vocal chop melody using a vocal sample, in the style of artists such as Coco Bryce or Frankel & Harper.

Have a look through Loopcloud to find a sample that you like the sound of. It can really be any sample but in the context of UKG a clean, female pop vocal will work best. 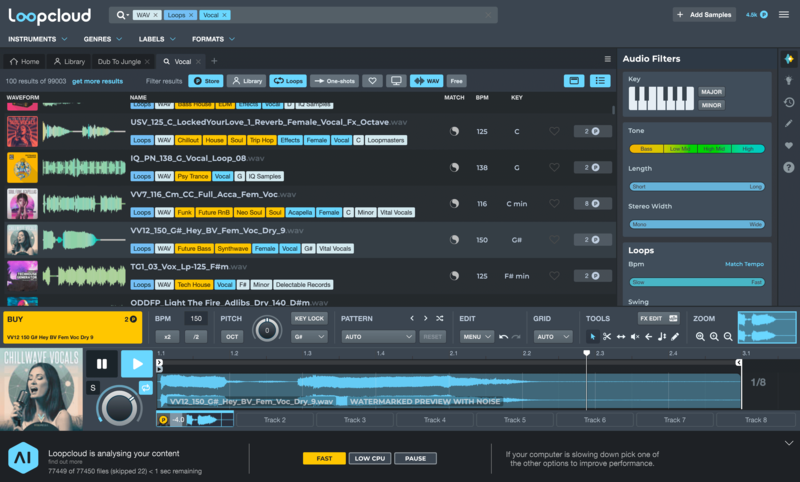 Vital Vocals have vocal-based sample packs in loads of different styles – we’ll be sure to find something in their sample catalogue.

In order to get a feel for how our vocal chops will groove with a beat, let's find a full drum loop on Loopcloud. We’ll search for a garage beat. 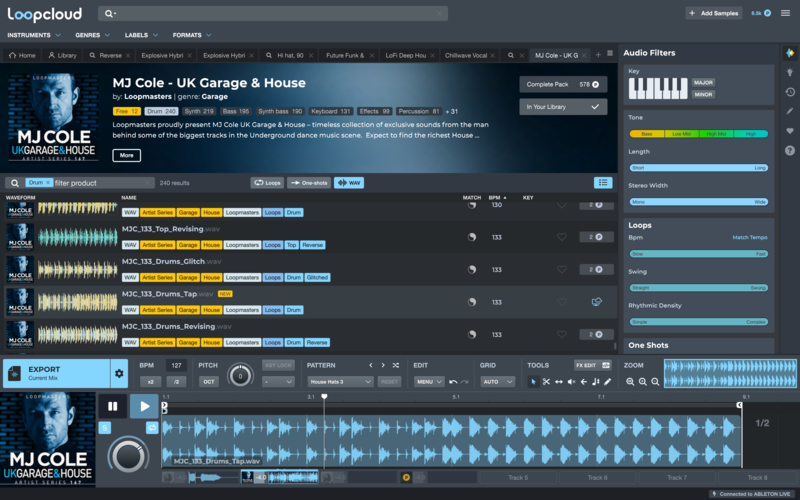 Now it’s time to get creative and just experiment with Loopcloud’s patterns. The shuffle button is great for quickly auditioning various sequences – let’s see what we can come up with.

A groove made with the pattern ‘House Piano Chord 1’ is pretty cool.  Using ‘Synth Trance Arp 2’ doesn’t sound very garagey, but it would work well in an EDM track.  Patterning the vocals with ‘Shaker 2’ sounds awesome, and it’s got the perfect skippy feel we want.

One way the pattern editor can be used is to rewrite melodic and chord loops. All we have to do is find a loop, press shuffle in the pattern section, and boom – we have a new melody. Let’s try it out with a few different loops

We started with a funk guitar sample from Loopmaster’s Neo Jazz Funk pack.  And, after trying out a few different patterns, we settled on the pattern ‘Dub Shuffle 1’. The loop is totally transformed.

Next up, let’s experiment with a bass guitar, we’ll work with one from Loopmaster’s Voyage - Chilled Trip Hop & Electronica.  With a new pattern (DNB 808 Bass) and a quick tempo increase, we now have a grooving dance floor-ready bassline.

Finally, let’s see what cool results we can get with a harp loop. We’ve picked an ethereal harp loop from Dreamy RnB by Famous Audio.  Now, with a little help from the pattern preset ‘Garage_1’, we can transform it into a totally new, more energetic loop.

Loopcloud’s sound editor also comes with 10 plugin-style effects that you can use to add even more creative sound design elements to your samples. The parameters of these effects can be automated over time, and those 'automations' can be saved into patterns.

To hear some really creative uses of this feature, head to the Creative Effects section of the Pattern Presets menu. Within Creative Effects, you’ll find preset banks for Delays, Fake Delays, Filters, Multi-Effects and Reverbs as well as a few Riser creators. Let’s listen to how a few of the effects sound.

We’ll start by messing around with some of the Delay Effect presets. We’ve loaded a basic drum loop in Track 1.  Now, let’s apply one of the Pattern Editor presets. We’ll go to Creative Effects > Delay Effect > Glass Room Delay. 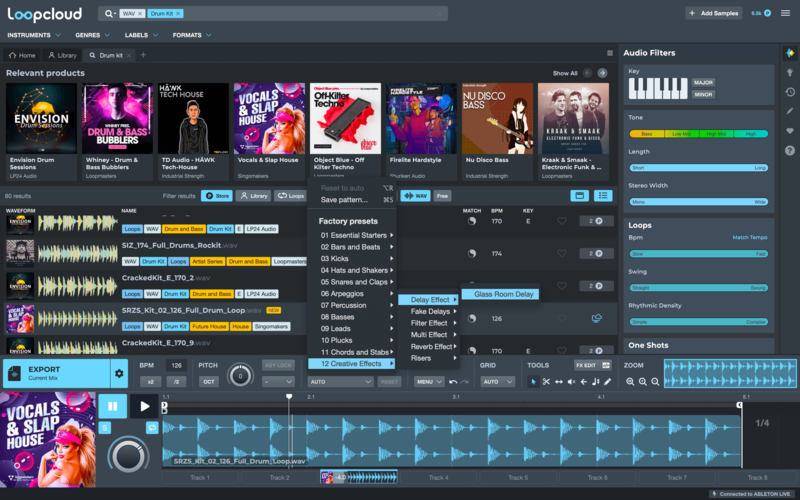 At the moment the delay time is very short which gives a metallic style effect. We can mess around with the delay settings via the FX EDIT button in the Tools section. Click it and all active effects will become visible in a left to right effects rack.

By lengthening the delay time we can create more of a rolling house style beat. We’ll also introduce a little more HPF to stop the bassy kick from building up too much.  Let’s beef up the loop with some distortion. By clicking the plus icon to the right of the Delay unit, we open up a menu with all the available effects in Loopcloud. We’ll load the default ToneBox patch and mess around until we have a harder-hitting, LoFi-style sound. 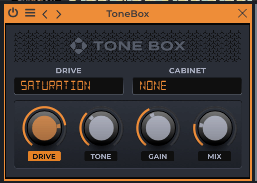 Effects can be applied to certain sections of the sample. Let’s do that with the Stop Reverse effect. We’ll load it up and then, in the sample window, drag the grey box to only cover a small portion of the waveform. Now the vinyl stop sound will only be applied there.

Finally, we’ll add an automated effect. Let’s add a filter sweep to the very beginning of the loop for that extra bit of interest.

Hopefully, this article has shown you a few creative ways the Pattern Editor can be used. Of course, like any musical tool, there are limitless possibilities for creativity. The best piece of advice we can give is to just experiment and see what unique sounds you can come up with.