FeaturesPlugin SuitePlansTutorialsBlogSounds
Sammie Hall: “I’ve Still Got the Vocal Hooks in My Head”
12 Jan '2022
The Drum and Bass vocalist and songwriter on recording her sample pack 'Liquid Drum & Bass Vocals' for EST studios

Some of the best dancefloor tracks are not only built on drums that knock and basslines that groove, but also catchy vocal hooks that live long in the memory. There’s nothing quite like hearing a stirring vocal over a banging beat, whether it’s an original performance or a sample from a place you might not expect. Sammie Hall is a talented and versatile vocalist who’s been building up her name on the drum and bass scene in recent years, hosting a weekly DnB show on Brighton based Radio Reverb and working with artists like SOLA and Tobax.

Her latest project is a huge vocal sample pack from EST Studios, Liquid Drum & Bass Vocals, which is available on Loopmasters and Loopcloud now. Expect to find heartfelt vocal leads influenced by artists like Technimatic, Hybrid Minds, Monrroe, Calibre, LSB, and Spectrasoul. We caught up with Sammie to talk about her career to date, and how she approached putting Liquid Drum & Bass Vocals together as a vocalist first and foremost.

How did you initially get into singing, and was it something you had to practice to get good at?

I first got into singing when I was really little because my mum and dad always used to take my brothers and sisters and I to holiday camps every year; they always had singing competitions and I loved entering them. I was also in a theatre school when I was younger, so I was always singing there. Then when I was a teenager I used to love going to karaoke. We all used to go down to Brighton pier, to a bar called Horatio’s, and sing karaoke every weekend. As the years went on I discovered open mic nights, and taught myself how to play guitar, so I got involved in quite a few vocal acapella groups and cover bands. So in other words, a lot of practice! Thousands of hours have gone into it.

I didn’t get into singing lessons until a lot later on, and I actually found my singing teacher completely by chance. I was working for this franking machine company – you can use them instead of stamps – and I was going door to door because I’ve always worked in sales. I was just knocking on people’s doors saying: “If you’ve got a franking machine I can save you some money”, and this lady answered the door and said “We don’t have any franking machines, but we do have singing lessons if you’d like to come in?” – so I did! Before you know it I was singing some Adele song at the top of my lungs, and from then on I had regular singing lessons every Saturday.

How did you start getting into singing on drum and bass tracks?

I’ve loved drum and bass since I was teenager. I started going to raves quite young, from about the age of sixteen, and I’d mainly go to Fabric and SE1 in London, places like that. I’d go up there on a Friday and come back late on the Sunday, just constantly raving all weekend. One of the first jobs I ever had was I got my own drum and bass radio show for a station called Radio Reverb, in Brighton. That show was from seven to nine in the morning, three days a week, so I would be going to raves to interview the DJs and MCs. It was the most fun time in my life!

I was at a rave one time, and I got chatting to a producer there at about half six in the morning. One of the DJs had literally just played a sample from one of my acoustic tracks, just for that night because it was my hen-do. And so this producer – he’s called Trouble – heard my voice and said that he really wanted me to sing on one of his tracks. I kept in touch with him for the best part of a year, and I really thought I couldn’t do it because I tried and just kept messing up, but then eventually we started getting this track together. It’s a track called Playing with Fire that still hasn’t been released yet, but they were my first ever drum and bass vocals. 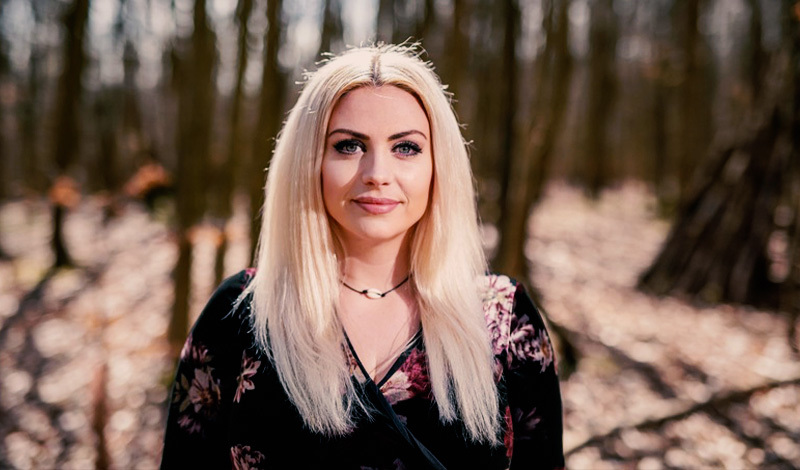 When you’re going into a vocal session, what sort of things do you do to prepare?

I’ll avoid things like caffeine and dairy, because they can really dehydrate your vocal chords. I’ll drink lots of water, and use a steamer before I’m going to be recording. I always try to make sure I’m spending a lot of time relaxing before a vocal session as well, because if you’re stressed then that can strain your voice. If I’m tired I just won’t do it at all, because there have been times before when I haven’t been happy with the result because I can hear the fatigue in my voice. I’m a perfectionist when it comes to recording, everything has to be absolutely spot on.

What kind of working dynamic do you have with producers, do they send you tracks to work with or do you start with the vocals first?

Quite often producers will ask me to send them some vocal acapellas, but that’s more difficult because you have nothing to really work off, unless you’ve already written an acoustic song on the guitar or something like that. In general I prefer writing to a track, but I’ve recently discovered co-writing with other people, and I love it. It’s so much more fun–it’s amazing to be able to work with other people. 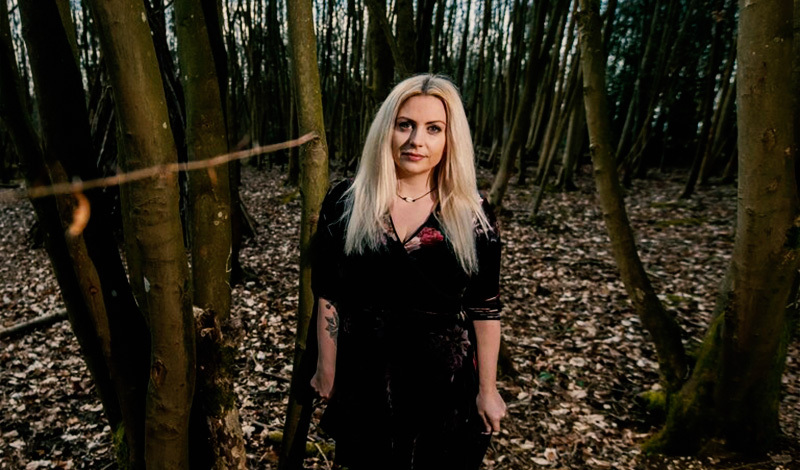 I’ve built up my little network of a group of producers who all get on very well and just bounce off each other. I feel like I’ve been really lucky with the people that I’ve worked with, because they’ve all been really easygoing, and really good with communication. Communication really is the main thing when you’re working with people who aren’t vocalists, and I did find that to be an issue to start with, you can be left in the dark about things and then get a surprise when it comes to release day and you’re not credited properly or something like that. I try to make sure that I manage expectations from all sides early on, and keep everyone in the loop.

For your sample pack, did you have reference material to write over?

This sample pack has actually been one of the largest projects that I’ve ever done, and my favourite to date, so I decided that I didn’t want to hold anything back because I wanted it to be at a really high standard. I’ve still got the hooks going through my head at the moment, day to day! There were times when I felt like I was going to run out of material, but I just kept going and going. I worked on this with my friend James from SOLA, an incredible vocal engineer and producer, and an absolutely brilliant person to work with. We spent about 120 hours each working on that sample pack. I probably wasn’t expecting it to take that long, but we just kept going with it and adding full song construction kits, extra spoken word bits and so many layers.

How it worked was that I went onto my computer and searched random things like ‘liquid track for Sammie’, or ‘drum and bass tune’, which brought up all the tracks that I’ve ever been sent over the last couple of years. We were also provided with some stuff from EST, loops and tracks to work off. Then I just co-wrote the lyrics and melodies with James over all those tracks. It was a huge task, and such a relief when we finally got it finished. Even making sure everything was organized and named correctly, with the right BPM and key, took forever! 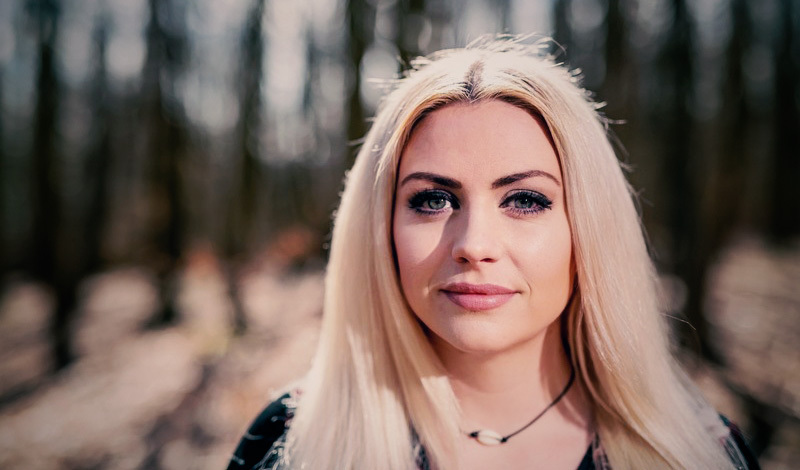 Do you have any tips for anybody that wants to get into singing themselves?

Any chance you can get, collaborate with others because you can always learn something. It’s also always great to have people that you can send some of your work to and get constructive feedback on. If you’re just starting out don’t get too disheartened by rejection, but also celebrate the little victories you get. When I first started I had this glass jar of memories, so every time I had a little memory to do with my music, or if I played a gig, I would write it down and stick the piece of paper in the jar. I’m going to open them when I’m old and read through the memories. Do it because you love it, work hard and keep moving the goalposts to push yourself forward.

What have you got coming up that we can look out for?

I’ve got a night coming up with SOLA, on the 10th of December at Rebellion in Manchester. We do these live shows and I sing the tracks that I feature on, but I’m also going to start doing some other tracks with other producers as well. I’ve just had two tracks come out recently, one on Aggro’s EP The Trenches called ‘I’ve Been Waiting’ which came out on Subliminal Recordings, and another track called ‘Breathe’ with Tobax which came out on Play Me Records. I’ve got loads of other tracks in the works so you can expect plenty of releases this year and next.