FeaturesPlugin SuitePlansTutorialsBlogSounds
Natalia Clavier on how sound healing infuses her musical identity
11 Mar '2022
The Argentinian singer, songwriter and DJ shares her experiences with medicine songs and sound healing, and the vision for her debut sample pack ‘Water’

Anyone who’s ever mended a broken heart with a song on repeat, or had their day turned around by the energy of a gig, will testify that music has restorative powers. For musician and sound practitioner Natalia Clavier though, her music really is medicine. Natalia’s work is characterised by complex layers of organic and electronic textures and led by her conviction in the power of sound to channel deeper levels of truth and meaning.

Clavier has released three solo albums, and writes and performs as the lead singer for the internationally acclaimed electronic world music group Thievery Corporation. Her ethereal vocals have a tender quality that is instantly emotive for the listener and can be found on the recently released VOXMANA EP Dança da Liberação, as well as the countless house and techno tracks that she’s featured on over the years.

Water, Natalia’s debut sample pack on Loopcloud, is a concept project that introduces the principles of sound healing into the world of music production. Utilizing instruments from her sound healing practice to support her trademark vocals, the ‘keeper of medicine songs’ offers up a fluid, shifting mix of vocal and instrumental samples for producers to take in any direction they desire. Over the coming months, Loopcloud will explore the healing power of music further, by shining a light on the creative processes and artist stories in the space.

We caught up with Natalia to chat about her musical history, the process behind the pack’s creation, and the role of sound healing in her life.

What are your origins in music and how did you go down the path of creating music yourself?

I’ve been singing for pretty much my whole life. I remember my first performance vividly – I was three years old, singing and playing the xylophone in my kindergarten choir. When I was 11, I was the soloist in a folklore ensemble that was a part of a big show, and we used to do little tours around public schools. That was a little taste of what performing is like, and I learned about harmonies and things like that, but I’ve never had a formal musical education in any sense.

When I was a teenager, my godmother gave me a Sara Vaughn cassette tape, and that’s when I discovered jazz. I fell completely in love with it, and I decided to become a jazz singer. From then on I started learning all the jazz standards by listening to records and imitating what I was hearing. For a little while I worked as a jazz singer, but then I discovered electronic music through Massive Attack, Björk and Portishead and it blew my mind. I realised that I could do anything – in any genre or style – and it wouldn’t really matter. Electronic music is a blank canvas and stylistically speaking there are no restrictions, especially when it comes to vocals.

You recently released an EP with VOXMANA, which is very much a mix of organic and electronic textures. What’s your process of making music like?

Andrei Matorin, who is my music partner in VOXMANA, is a virtuoso violinist and producer from Brazil, whereas I was born and raised in Argentina myself. Therefore, there are a lot of influences from Brazilian popular music and Argentinian folklore in the songs, but also from jazz because we’re both deeply rooted in that genre. I explained my connection with jazz already, but in Andrei’s case he went to Berklee College of Music and specialised in jazz. At the same time, we both have a very similar spiritual path when it comes to alternative healing modalities, plant medicine and ceremonies, and meditation. 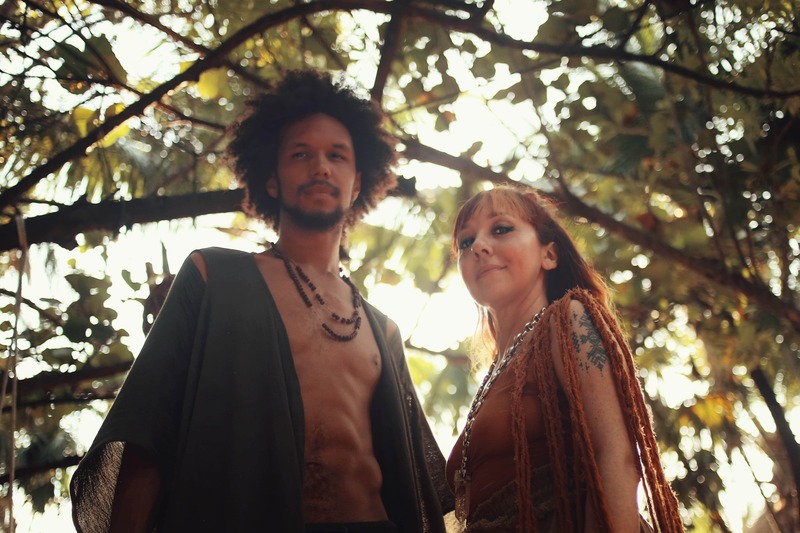 When it came to this project, we were both at a point where we wanted it to be greater than the sum of its parts; more than just a pretty voice-over complex layers of sounds and violin loops. We would meet in Andrei’s studio in Brooklyn, and first of all we would set an intention for the day through a quick meditation. Then we would record a jam session with a GoPro camera, which captured everything that was coming from the violin, microphone and loop pedals, and allowed us to be present and improvise. We did this for a few months whenever I wasn't touring with Thievery Corporation, and compiled hours and hours of material.

The next phase was to go through all of the sessions and pick out what was a song and what wasn’t. So, what you hear on the EP is a combination of all of that, plus whatever it was that we were able to channel separately afterwards. Andrei likes to sit down and write, whereas I feel like the songs already exist, and they either wake me up in the middle of the night or just stick in my head until I’m able to grab my phone and record them. Often a song idea can be trying so hard to get through that it feels like it’s assaulting me!

Your concept for your sample packs with Loopmasters is to go through the four elements, with the first being Water. Can you tell us about how you landed on that idea?

With the sample packs, my mission was to make sound healing available to everyone. I envisioned people using sound healing instruments in a super hardcore techno track, which I think would sound amazing. The idea for the packs being themed as the elements made sense because it’s a subliminal way of talking about the Earth and what we’re doing to her. I call it guerilla subliminal spiritual healing!

As for why I decided to go with Water first, basically, I was learning how to play the harp, and playing these two chords over and over again. The words came over that, in English and Spanish (although I didn’t include the Spanish words in this pack, to keep it simple). I wanted to invoke the fluidity of water with spoken word and allow people to be able to take the sounds wherever they desire. I’m actually planning on releasing a track called ‘Underwater’ separately, in which you’ll be able to hear the seed of the creative ideas for the pack. 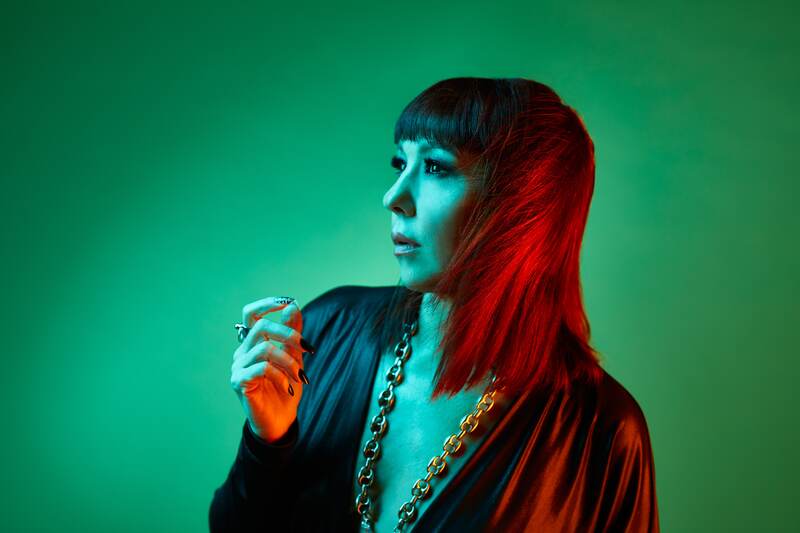 Did the process of creating the pack involve fleshing out full songs?

In this case, the method came about through what I would call a ‘beautiful accident’, because initially when we were discussing the project, my understanding was that I needed to write a demo song to accompany the pack. In reality, the demo is a compilation of the sounds in track form, not really an actual composition like the one that I wrote. I still kept the song, however, and that beautiful accident has now become part of my method for making the packs!

As you mentioned earlier, the instruments in the pack are used in sound healing, which you practice yourself. How does that work?

The same instruments that I use for the pack I also use for what I call sound journeys or ceremonies, which are basically guided meditations. I begin with some breath work, which helps you to relax and get into a receptive state. The only requirement when you’re receiving sound healing is to breathe and listen. Next, I create soundscapes with my voice by looping and layering whatever it is that I’m channeling in the moment. Through their different frequencies, the sound healing instruments invoke and evoke emotional memories, and create places and images in your mind that are full of serenity and beauty.

Sound healing is a multi-sensory experience that’s almost like gymnastics for the brain, because it helps with neuroplasticity. It helps to rewire the brain, which also happens every time you meditate. For this pack, I used instruments that are tuned to the element of water, for example, the flow chimes. I use them in pretty much every sound journey that I do because it helps to bring fluidity and the calm state that water provides. There’s another instrument called waterfall chimes, that are made out of seed shells and sound like an actual stream of water. Then there’s the river drum, which is filled with little stones that fall as you rotate the drum. It sounds like a rain stick that never ends.

All of the frequencies that these sounds produce, alongside the vocals and the words I’m saying at the same time, facilitate going deeper in the healing journey. When you let go and allow yourself to dive in – that’s when the healing happens. 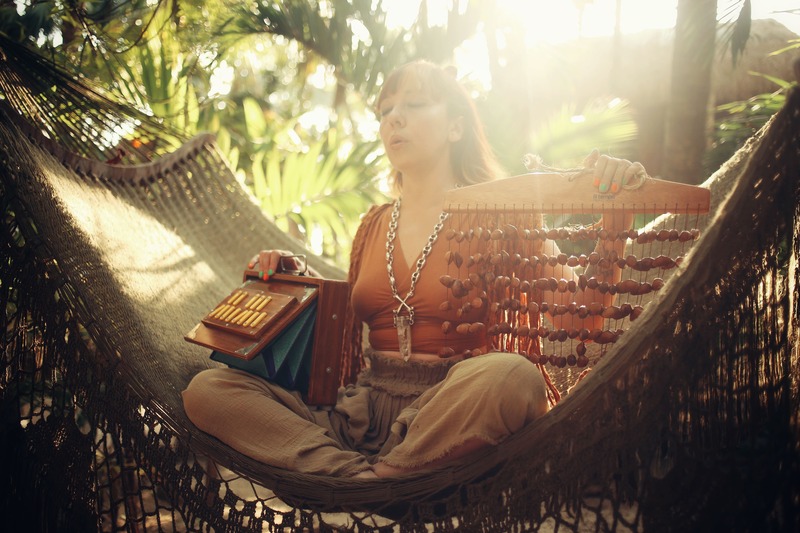 For how long has sound healing been a part of your life?

The discovery of the sound healing side of music came later on in my career, although there’s this huge intuitive part of it that’s always been there in my life. My first album came out in 2008, and supposedly had nothing to do with sound healing – it wasn’t on my radar at all. This was in the MySpace era, and I remember getting messages that didn’t make sense at the time saying things like: “I played your song and my hangover was cured”.

The album was produced by Eric Hilton of Thievery Corporation, and it was completely in Spanish. I got a letter from a woman who told me that one of the songs, ‘El Árbol’, was very important in her healing process when she was grieving the death of her son. ‘El Árbol’ means ‘tree’ and the woman told me that because her son was very tall, that was his nickname – I was bawling when I read the letter. She said she’d had to look up the meaning of the title, and didn’t understand any of the other lyrics in the song, but amazingly, what I was singing about was a kind of karmic love, and a life after life. 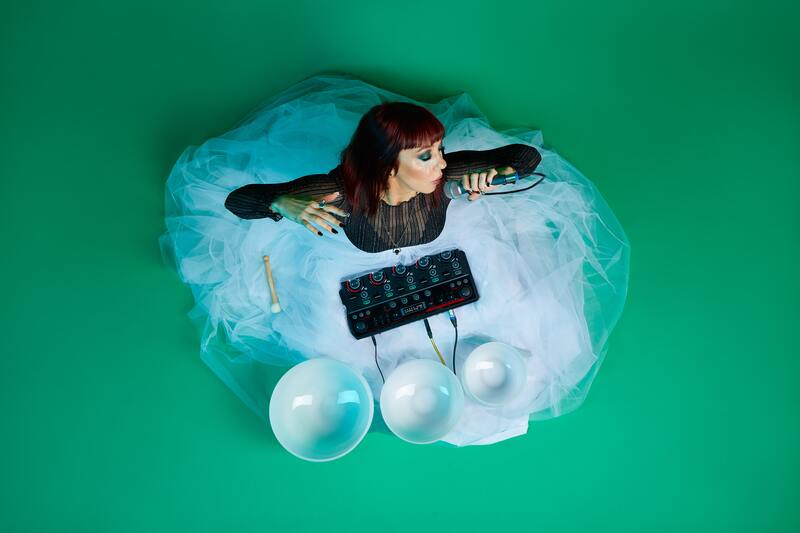 Again, I didn’t connect any of this until much later. I learned that certain vowels do certain things, and the same with notes, and I even learned that many medicine songs are in A minor. It’s so popular in the medicine song field that it’s often called ‘Ayahuasca minor’. My first album has so many songs in A minor! I had no idea what I was doing back then, but I was obviously doing something.

I really believe that my purpose here is to do something with the voice that I’ve been given, although I’m not arrogant enough to think that any of this truly belongs to me. For many years I fought against it, firstly due to issues with low self-esteem and self-doubt, and then later from a sense of injustice that I hadn’t become a really successful pop star. It took me a long time and a lot of personal work to understand what my true path was.