Nearly 40 years into his groove-laden career, Howie B’s sonic fingerprints can be found across many iconic albums and genres, and throughout the work of some of the biggest artists of the past few decades.

As a producer Howie B has worked with U2, Bjӧrk, Tricky, Massive Attack and more, and in his own work, he explores the boundaries of trip hop, taking the laid back feel of the genre and reinventing it in far-reaching ways. Now, Howie has distilled his sound for Loopmasters in his new sample pack ‘Howie B Drops Some Trip Hop’.

Inside, you’ll find a wide array of specially recorded sounds from the Scottish artist. Working in Les Studios Saint Germain in the heart of Paris, as well as remotely, Howie has collaborated with renowned bass player Tristan Bres and versatile drummer Toma Milteau to produce a truly one of a kind pack of complimentary trip hop samples, ready to be used in any way you like.

We caught up with the man himself to learn a little bit more about his sample pack, and his general approach to music.

How did your journey begin into the world of Trip Hop?

It began simply because I love hip hop! I loved the hip hop that was coming out of America at the time, but when I was making hip hop in London in the late 80s and early 90s, there weren’t really any rappers. There were people like Rodney P and a few others, but they were the only go-to guys. I would make instrumental hip hop – so instead of having someone rapping, I would just put a little melody on top – which then became trip hop.

Massive Attack were doing the same thing, and so were Soul II Soul, so I would have been in that zone. I did the first two Soul II Soul albums, and worked with Massive Attack as a mixing engineer, but on the days I was on my own I made my own music. I stayed in that sort of area for years, and then moved into breakbeat. Now I’ve come back down to hip hop and trip hop – it’s like a full circle of tempos. With old age, the lower tempos suit me better! 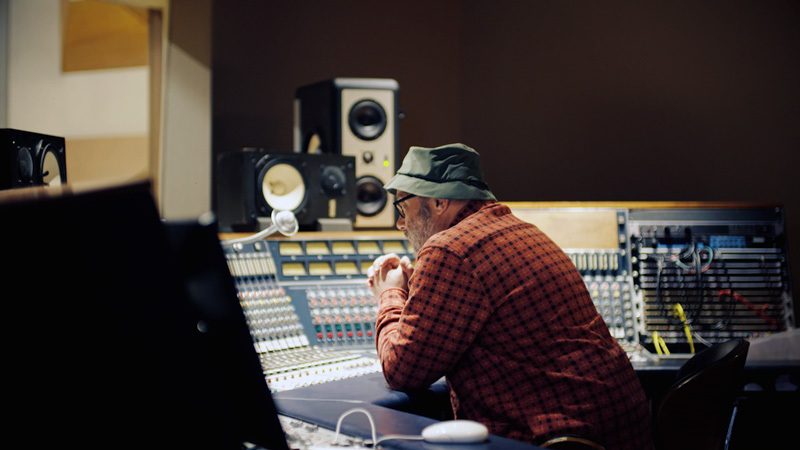 What can you tell us about your new sample pack, ‘Howie B Drops Some Trip Hop?’

When I was asked to put together a sample pack, I knew I wanted to make it a bit different. I started off making music in the 80s and 90s, and it was all based on loops, so I used to work in that world all the time. The difference was that I’d be creating my own loops, so I know sampling mainly from my own encounters. I’ve been asked by a few companies to do sample packs in the past and I’ve always rejected them because I never really felt the right vibe. A friend of mine told me to check out Loopmasters, and I thought they were really interesting. They got in touch about something else originally, but that idea developed into making a sample pack.

I didn’t want to just use my back catalogue or take stuff that I’ve never used from all my hard drives. I wanted to make it a bit tastier and that meant doing it live. So, I got a really good drummer, Toma, and bass player, Tristan, to help, who are both friends of mine. I prepared some ideas on Logic, and then brought them to Toma to rehearse the grooves and play around with his kit to get something that represented what I gave him. It didn’t have to be exact, more of a platform for him to jump off from. After Toma had created around 10 grooves, I got Tristan to play some bass lines on top of those, with A and B sections.

On top of that I added all my chord sounds and fucked up electronic shit, and that was it! I thought I could put it all together in three or four weeks, but it ended up taking three months. After a lot of hard work from myself and the other two musicians, I’m really happy with the result. 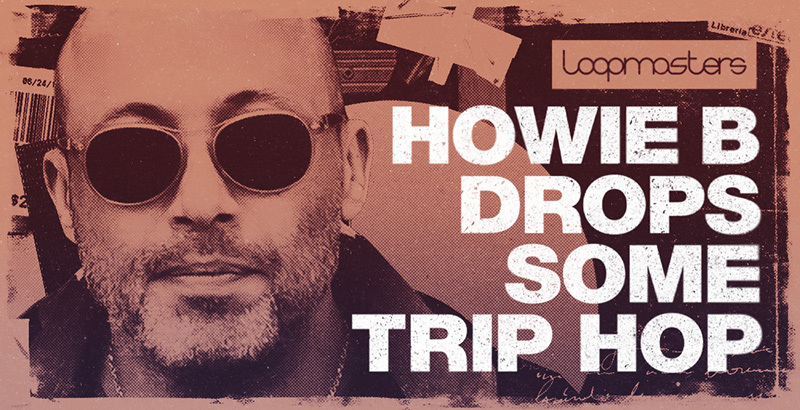 Where did you do the recording for the pack?

We did some recording in Les Saint Germains Studios in Paris, which is an incredible studio. The live room has a beautiful sound, and there’s a beautiful Neve broadcast desk in the control room. There’s a really special flavour in that place, but it’s very expensive! I live on a very small island, and Tristan actually lives in a village a few kilometres away from me, so that made it easy. Toma recorded his parts in his studio in Paris. All of this happened towards the end of the COVID pandemic, so we’d already been through a year and a half of working remotely – we’d got the gist of it! 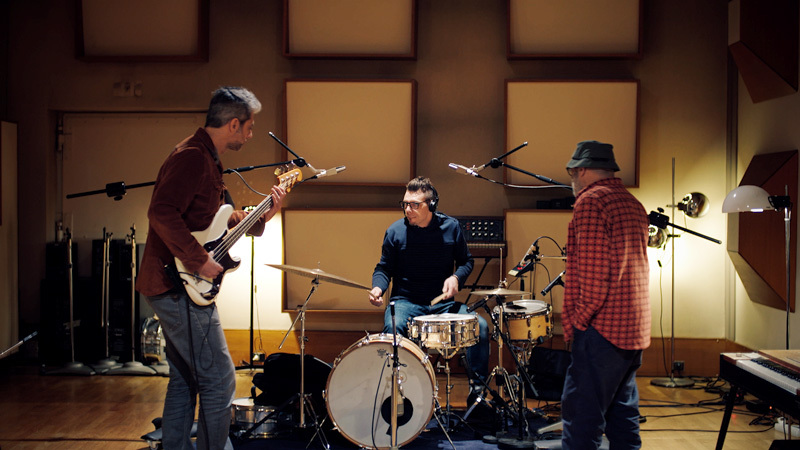 Once you’d got the sounds that Toma and Tristan had recorded, how did you go about processing them?

I used a mix of hardware and software to process the sounds. In the actual recording stage there was a lot of hardware used, but in the mixing stage I stopped using it because I find it a lot easier to work inside the box. The great thing about working with software, and working remotely over the last few years, is that it allows me to work on two or three projects at the same time. When you’re using hardware it’s much more difficult to do that.

I started off with the drums, then the bass, then the chords, and then the top line – it was kind of like a pyramid. We’d do an A section and a B section so that you have somewhere to move within the pack, just to give it a sense of variety. It sounds very simple, but as I got into the mixing it just didn’t stop! I kept the effects processing very light because I wanted to concentrate on the actual sound that was recorded, because it sounded really cool. It was already warm and heavy, and I didn’t want to colour it too much.

With the electronic stuff that I added, I was sampling sounds with my mics and then stretching them to make it so that you can hear a note in there, but you can’t really figure out where it comes from. Then I would do things like take a normal piano plugin and put it through a filter, or even outboard gear like an Echoplex. It was simple enough, but I added my little twist to it, which is what I love doing. 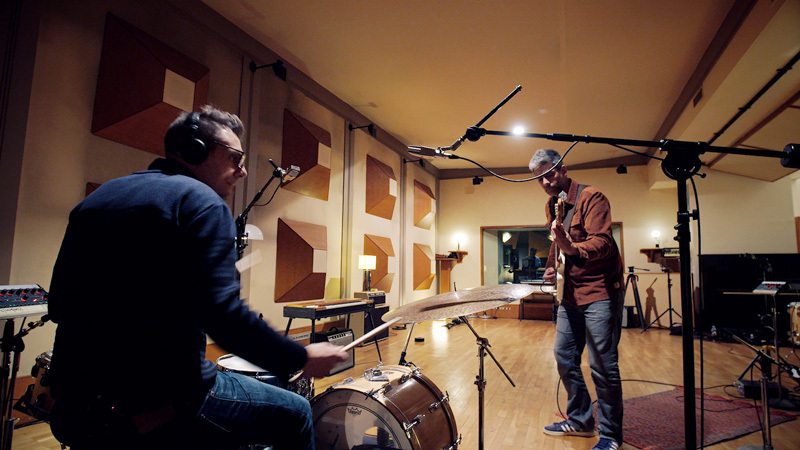 When you’re making your own music, is it a similar process to what you did for the sample pack at all?

Basically, I build grooves. With my upcoming album, most of it is groove-based. I’ll usually build a groove with a drum kit, or with a loop I’ve made. I might play a pattern, then sample that pattern and fuck it up – once I’ve brought it back in, then that’s the groove. The beautiful thing about music is working with other people. Even when I’m making my own music I like to get other people’s take on it, and see what their immediate reaction to it is. I’ll call up Tristan, for example, with a groove or a chord idea and ask him to put a bassline on it. He won’t ask what kind of bassline, he’ll just go “OK.”

Recently I’ve felt the urge to collaborate often. Where I live, there’s absolutely nothing around – not only am I working remotely but I’m living on a bloody island! The whole remote working thing can be both exhausting and inspiring, but it’s a really useful and exciting way of working on songs. I can send off an idea to a singer and then hear my song come to life. My new album has become more interesting because of that; it’s got a much wider scope than if I’d been limited to working directly with people in the studio. At the same time, the experience of being in the studio in Paris for the sample pack with two other musicians was magic, so there’s got to be a balance.

Any tips for collaborating in the studio?

Yeah, drop the ego! It’s difficult, but you have to be in a situation where you can actually express yourself, but without ego. Also, know when to say “no” and when to say “yes”, and respect the other musician. You’ve got to be responsible, and you’ve got to be a listener. Listen to what their intentions are, and their feelings. Music is a social thing, so it should be collaborative – that’s the very essence of it for me. Of course, the studio can be a high octane environment. People are opening up their souls, so it’s fair to say I’ve had some mental moments over the years, including walkouts, tears and fights!

Could you share with us three of your favourite studio hacks?

Sure. The first hack is to add add a tight chorus in mono through an auxiliary send to kick drums, this adds a wee bit of warmth and more definition in the mix. For the second hack, there are times when I'm doing a balance and I'm happy with all the sounds. Then when I put all the faders on I've lost definition on the kick drum. Just put it out of phase and then boom, it's there! Finally, to get really interesting hi hat patterns I'll send the hat through an auxilliary send to a quarter note delay with an eight note delay inserted before it. Crazy stuff starts to happen!

Howie B showcases his 'Howie B Drops Some Trip Hop' sample pack in this exclusive 8-Track Attack Loopcloud session. Take a downtempo masterclass from one of the UK's Trip-Hop tastemakers, as he puts together a smouldering groove in Loopcloud. Download the exclusive session file here.