Songs are like jigsaw puzzles, with multiple parts that fit together to make a whole. Intros, verses, pre choruses, choruses, bridges and outros should combine fluidly in one unified listening experience, and that’s where transitions come in. Our job as music producers is to accommodate the rise and fall of the track by linking the different sections together in some way.

The key to effective transitions is managing the energy of the track from one part to the next. If you want to transition into a high energy section, removing some of the energy from the previous section will help it to feel like it’s exploding into life. There are plenty of ways to do this, whether you’re using melodies, samples, effects or arrangement adjustments, but we’ve made your life easier and rounded up the best ways to create transitions in your music.

By silencing an element of the track as you move from one section to another you signal to the listener that something is about to change. This technique works well if you’re transitioning from a ‘smaller’ section like a verse into a ‘bigger’ section like a chorus.

There are all sorts of ways you can use track muting to transition in a song, but it tends to be most effective when applied to the drum track. Removing an entire drum loop for half a bar or even a full bar before the chorus heightens the impact of the beat when it eventually comes back in. 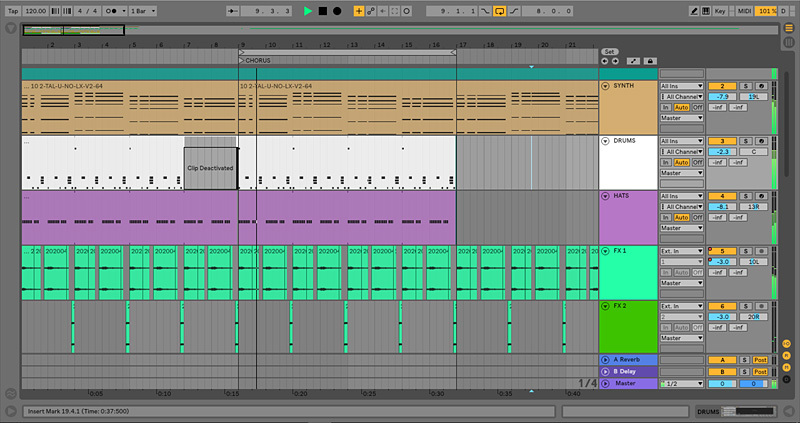 Alternatively, you could remove the kick and snare drum pattern from your loop, leaving only the hi-hats. This works for two reasons: hats live in the high end of the frequency spectrum, so transitioning from a hi-hat loop into a full beat creates a sense of expansion when the kick and snare return. As well as that, removing the kick, which is the pumping heartbeat of a song, and the snare, which usually hits on the backbeat, halts the momentum of the track temporarily and makes it more satisfying when it resumes.

A good old fashioned filter sweep, beloved by DJs the world over, is often just the thing you need to transition into a new part of your track. This technique works especially well on builds, where the idea is that you’re slowly building a climactic peak and then transitioning into a full throttle drop.

You can automate the frequency bands on a filter plugin to sweep out either the low end or the high end of an instrument track, or even apply this effect to the master. Try using a high-pass filter to create an empty space in the low end if you’re moving into a particularly bass heavy section. The listener will then feel the bass that bit more when it comes back in. 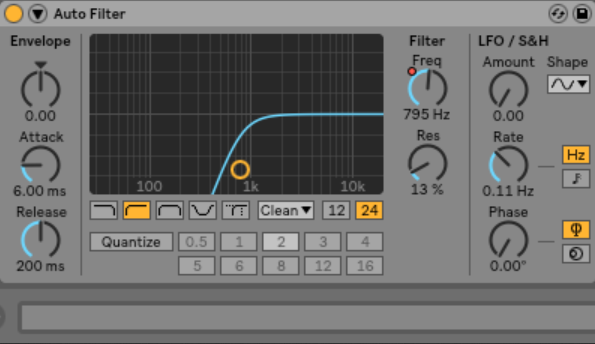 On the other hand, a low-pass filter can be used to smooth the transition from a busy section to a more sparse one. Let’s say you have a bridge section after a chorus, and a lot of elements in the track are dropping out. You could automate a low-pass filter with a small dip before the end of the section to fade out anything in the chorus that doesn’t appear in the bridge, with the result being  that the transition doesn’t sound so abrupt.

Inside Loopcloud it’s even easier to do all this, as the FX Editor section contains a Filter plugin that has Sweep Down and Sweep Up presets. Simply select a sample and open up the Effects tab in FX Editor, then choose a Filter preset. You can make adjustments to the filter’s automation curve in the sample editing section at the bottom. 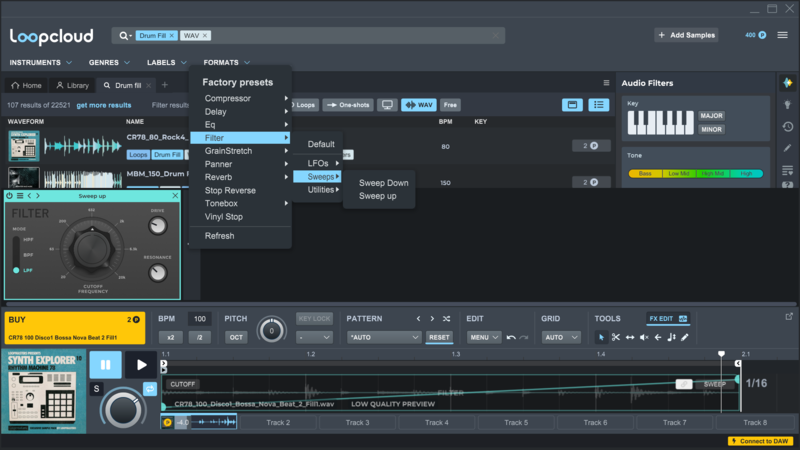 Perhaps the oldest transition technique in this last, drum fills have been a tried and tested method of stitching together musical parts for years. Essentially, a fill is a short rhythmic variation used to ‘fill’ a gap before a new musical phrase is introduced. Fills generally come at the end of a phrase and set up the next one, with the departure from the main beat refreshing the ear of the listener or creating anticipation for an upcoming change.

Whenever you want to build up to a climax in a song, a drum fill can be used to create tension and intensity. The louder and longer the fill lasts, the more tension it builds. The snare drum is perhaps the most effective way of expressing tension in a fill, starting with quarter or eighth notes and building up into the smaller subdivisions like 1/16 or 1/32 notes. This creates a rolling effect that feels like a wave about to break onto the shore. Listen to Shaun Dean vs Majestic’s Shut You Down to hear an example of this:

If you’re producing music with a live drum track, the drum fills you can include will be reliant on the ability of the drummer you’re recording. For a sample-based approach, try browsing Loopcloud’s Drum Fills section to find a rhythmic phrase to suit. Whether you need acoustic or electronic drums, you’ll find plenty of grooves and fills that you can stitch together into one seamless performance. 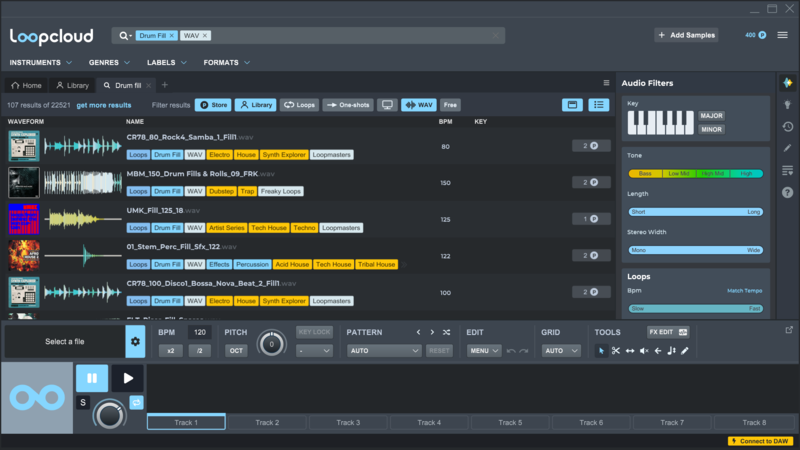 For some handy drum programming tips and tricks, check out our article “8 Drum Sequencing Tips for Better Beats”

Crash cymbals are generally used on beat one as a capital letter to signify the start of a fresh musical sentence. The initial sharp transient followed by the gradually decaying tail fills space in the background and sets the new phrase off on the front foot.

Reverse cymbals, on the other hand, are a commonly used method of building into a new phrase. By flipping the audio around, the cymbal starts from its tail, gradually building into the attack transient as a final flourish. You’ll find plenty of reverse cymbal samples in the Loopcloud catalogue, simply type “reverse cymbal” in the search bar at the top of the app. Alternatively, you can hit the Reverse arrow in the Tools section of the sample editor to flip a normal crash. 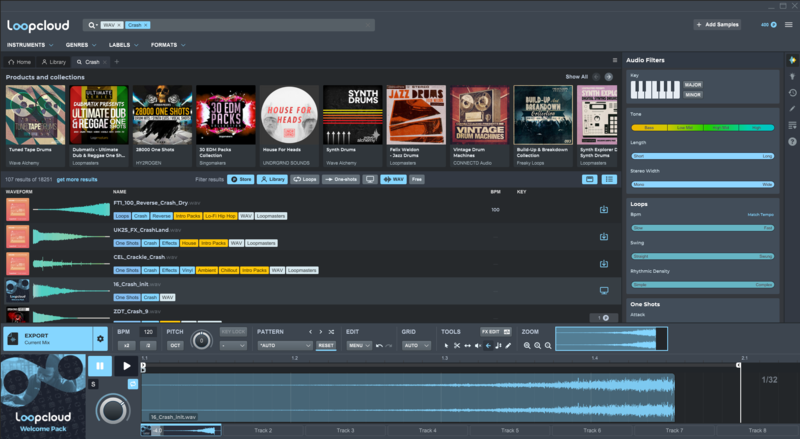 If you like, you can carry over the reverse cymbal into the first beat of the next bar using reverb. Simply automate the dry/wet knob so that it peaks at the end of the phrase and tails off in the next bar. Using this technique will mean that you don’t need a crash on beat one of the bar you’re transitioning to, as the reverb tail will perform the same function.

Often, a clever use of melody can be enough to create fluidity between track sections. One way of using a melody to your advantage in a transition is to start it early. An anacrusis is a series of notes that leads into the first downbeat of a bar, so the melody effectively starts a beat or two early. Robert Mile’s Children and Tina Turner’s I Don’t Wanna Lose You are two examples of this.

You might use an anacrusis to transition from a chorus section into a lead hook. To emphasise the incoming riff, mute some or all of the track for the beat that the melody comes in on. This allows the extra notes to be heard on their own. Try combining this transition effect with a drum fill or a reverse cymbal to really heighten the sense of tension and release.

As we mentioned earlier, choruses should be ‘bigger’ than verses. What exactly is meant by this though? Well. songs work best when there’s a natural rise and fall to their energy. There’s no sense in starting a track at full tilt and then keeping it there the entire time, it would be exhausting for the listener!

The energy of a track should typically be at its highest in the chorus, with vocals that jump in range, more dynamic instrument parts and a fuller mix. We can get a chorus to stand out further by adjusting its width. Using a stereo imaging plugin on the master you can adjust the parameters to add depth and width to a chorus and pull it in so that it’s narrower in the verse. You could also use pitch-shifting plugins like Soundtoys’ MicroShift on vocals or synth parts to add larger than life width when needed. 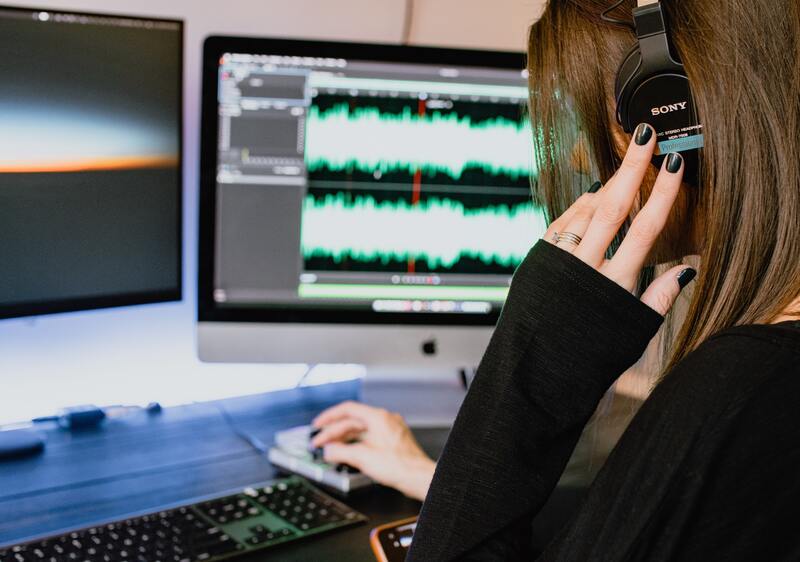 Armed with the transition tips we’ve shared with you today, you should be free to smoothly segue between sections in your tracks. Try and listen out for arrangement-bridging production techniques in your favourite songs, as chances are you’ll start noticing loads once you start focusing on them!