Like any craft, music production has its unglamorous side, requiring long sessions spent underground in dead acoustic spaces with terrible phone reception, soundtracked by a cacophony of thudding noises as you audition the right kick sample for your latest track. These are the hard yards that every producer knows well, so when we meet for our interview there are no prizes for guessing how EMIKA has spent her morning.

“I’ve just been methodically going through thousands of kicks on Loopcloud and figuring out how I can make new drums next year. I’ve done it for like four hours, but I really feel like I’m training my mind. Maybe I’ll make a sounds label next year!”

A sounds label from an artist with a background as a sound designer at Native Instruments, as well as six critically acclaimed albums and a catalogue of envelope-pushing productions in both the electronic and neo-classical realms, is an attractive proposition. Until that day though, we can make do with her debut Producer Sounds sample pack, which features an exciting array of sonics inspired by her influences in techno, dubstep, bass, classical and post-modern music.  We caught up with EMIKA to find out more.

If you were to end up making a sounds label, how would that actually work?

I’d like to invite other people to work on it as well, we’ve got artists and producers on our label and then there’s a bunch of sound designers that I’ve gotten to know over the years. They all sort of sit and work remotely, but don’t really have an outlet for their sounds.

I’m still trying to figure it all out, but I definitely feel like there need to be new drums in the world. When I listen to music I hear the same 20 sounds that everyone will just compress differently. It’s always got the same tone to it, and I want to figure out how to do something cooler than that.

I don’t really know where to start, because drum machines are all so retro and so old. And then on the other hand if you start with acoustic stuff, it always sounds immediately like some sort of Hip-Hop thing, so it’s really hard! All I know is I don’t really like any drums that are out there, so I figured the best place to start is trawling through Loopcloud and seeing what’s what, so I’ve got a selection I like.

I’ll figure out what comes next, maybe I’ll go to the German DIY hardware shops and buy loads of random nails and metal for sounds! 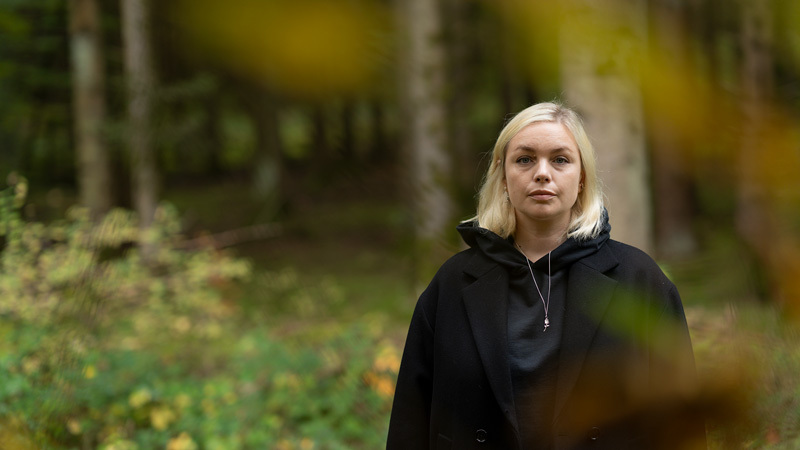 You’re living in the Black Forest at the moment, but you previously lived in Berlin. How has that change in environment impacted you as an artist?

I live in a really small village, and everyone that’s here has always lived here. Virtually everyone has farmland or works in the forest, and it’s all so family-oriented and organised in terms of community. It feels really good being part of that community, and also it’s like a map for how I want to interact with my fans and listeners. It’s almost like a guide to inspire how I am online, rather than being led by the existing platforms out there.

It’s really nice to have some distance in that respect, to learn from the little community that we have here and then think “Ah, maybe I could do that on Patreon or share in a different way on Instagram.” I’m figuring out how to get away from this culture of narcissistic self-preservation and share inspiring things while not being at the centre of it all the time. 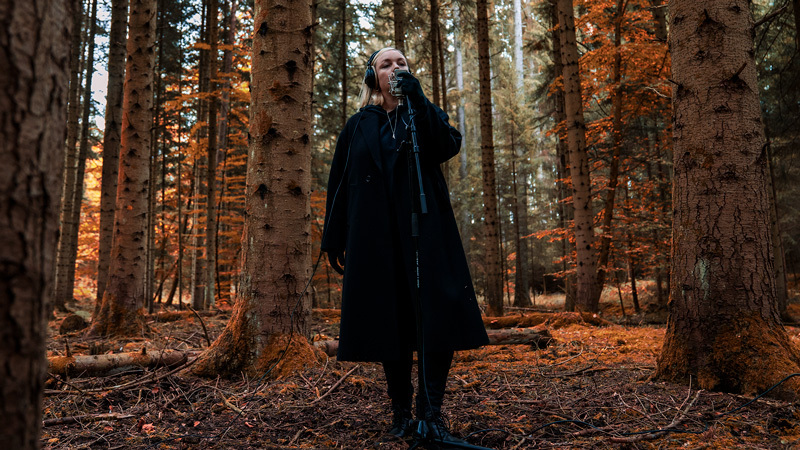 Do you think that sense of community is hard to find while living in the city?

I was searching for that for a really long time in all the different places I lived in. Cities are more about fleeting impulsive moments, people are constantly coming and going and never really staying in one place long enough for anything to organically come together. It’s like living in a train station.

People are always looking for the next thing in the city, and I was definitely doing that, it was a big part of who I was at the time. At some point though it’s also nice to stop and stand still, grow some roots and be a stable person who can provide stability for other people. You don’t have to always be the one who needs help, or who needs an assistant or a team. It’s a good feeling to now be able to help other artists grow what they want to do on the label. 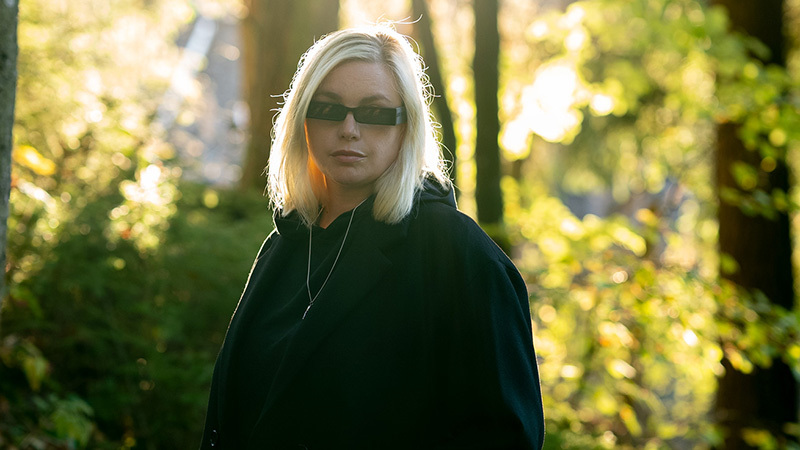 Are there any techniques or approaches that you’ve learned that help to keep creativity sustainable?

I’m still figuring a lot of it out. The main thing I’ve realised is that I didn’t have any sort of distance from what I was doing for a while, I was living so much inside this world of being in my studio or touring. Downtime in that world involves non-stop thinking, emails and interviews, living on YouTube and keeping up on tech and software. I identified so much with being an artist, and I think now I identify more with other things like being a mum and hanging out with other mums.

It’s so funny, I was hanging out with some mums recently and I mentioned a synthesizer, and they literally had no idea what that was! It was so funny for me to recognise that there are people out there that don’t know about any of this. I’ve been in the middle of it for 10 years and I didn’t really think too much about the fact that other people aren’t having the same experience as me. 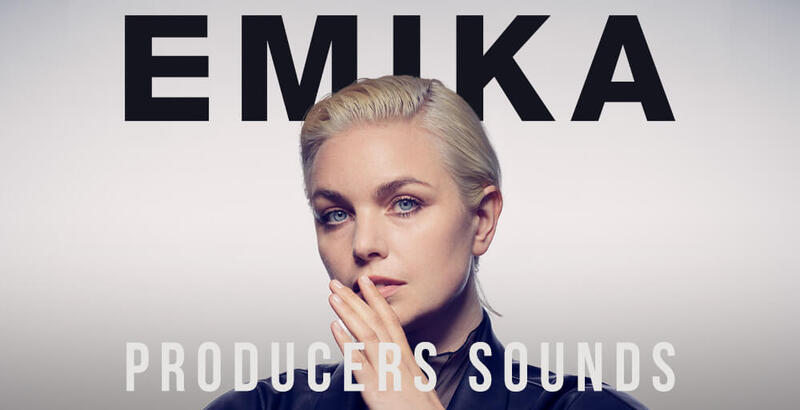 What was surprising to you about the process of making a sample pack?

I was working really hard on trying to make new stuff for the sample pack. Then the guys at Loopmasters recommended that I go through some old projects and see what’s there. I was really amazed because I’d been dealing with a really horrible period of self-doubt, lasting years, that had been clouding my judgement in many ways. It was really good for me to go through loads of old projects because it made me find gems that I had just written off because I was second-guessing myself too much.

I use samples a lot in my music which is kind of why I wanted to make a sample library. I’ve been so into sampling, and I’ve been given so many amazing samples from other producers, that I felt like I should give something back. Half of what I do is sample-based and the other half is synth-based. Because I play piano, it’s so nice to noodle around on analog synths, but also plugins as well. Drums and those kinds of sounds are always samples, and the rest is all made up of instruments that I play myself. 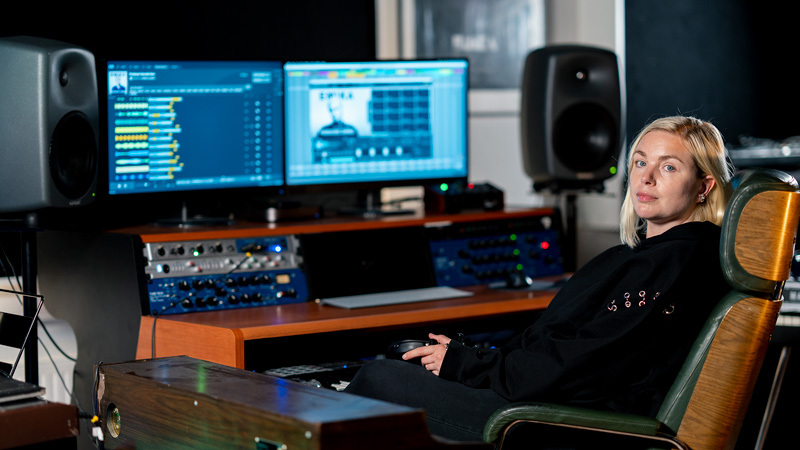 Do you have any favourite bits of gear in the studio?

Probably my favourite thing is my Tube-Tech vocal preamp. I’ve got a Tube-Tech multiband compressor as well, but that’s complicated. I really like my vocal preamp because you can just turn it on and sing anything in there and it sounds amazing. When you have real analog valves it’s worth every penny. It’s nice that you can simulate that with plugins, but flicking a switch and just having instant valve warm analog compression is so awesome.

The thing about my new studio is that I’ve really recognised the importance of amps and re-amping, and having an actual space where you’re not trying to dampen everything. Why would you have a big room if you’re just going to make it sound like a small box? After years of working with plugins in small places in Berlin, I think I’m really going to take some time to work with amps and cabinets and play with the actual room itself.

How do you go about translating songs that you work on in the studio into a live performance?

It took me a really long time, years of DJing and terrible shows. I have the Arturia KeyLab, which has a mixer on it and you can play pads, along with my piano, and then a ton of foot pedals. It’s all set up with Ableton and MIDI, and I’m a huge fan of being able to trigger things and not have to face the unnecessary stress of doing everything live.

I spent a long time looking at how other people like James Blake, Mode Selector, and Nils Frahm were doing things live, but in the end, I just started to feel like one of those one-person band contraptions, it was crazy. It’s no big deal, it’s only a backing track, and I made it anyway! I’ve got a planetarium show now with immersive dome visuals, so it’s more about me being there and people experiencing my voice live. I improvise a lot too, even with backing tracks.

I only arrived at that point though after years of DJing in underground clubs in Berlin and different places, where you plan what you’re going to play. You’ve got your 60-minute set, but if it’s going really well you get asked to keep playing, and that could be for another three hours. Also, sometimes you pick a track that completely bombs, and you have to try and get everyone back. So I learned to play live and improvise via DJing rather than being a musician.

"I learnt to play live and improvise via DJing rather than being a musician."

Was live performance something you did much of when you were learning the classical side of music?

No! I didn’t even play the piano in front of my parents, I had to be completely on my own. Even if I thought the neighbour was unpacking her car I’d have to wait. No, I hate the idea that someone else can hear what I’m doing and I still don’t really like it today. That’s why I need a studio, I need to be able to get away!