FeaturesPlugin SuitePlansTutorialsBlogSounds
How do I get my music onto Spotify playlists?
12 Apr '2022
Learn how to make sure your music ends up where it matters on the most popular Spotify playlists service in the world

More music is being released than ever before, but that’s both a blessing and a curse. On one hand, you’ve got the biggest potential audience in history, ready to discover new tracks. On the other, you’re competing against a ton of other releases, musicians, and search engine algorithms.

One way to get around this deluge of content is to harness the power of playlists. In this article we’ll take a look at how you can get your music onto playlists on the biggest and most popular music streaming platform in the world – Spotify. 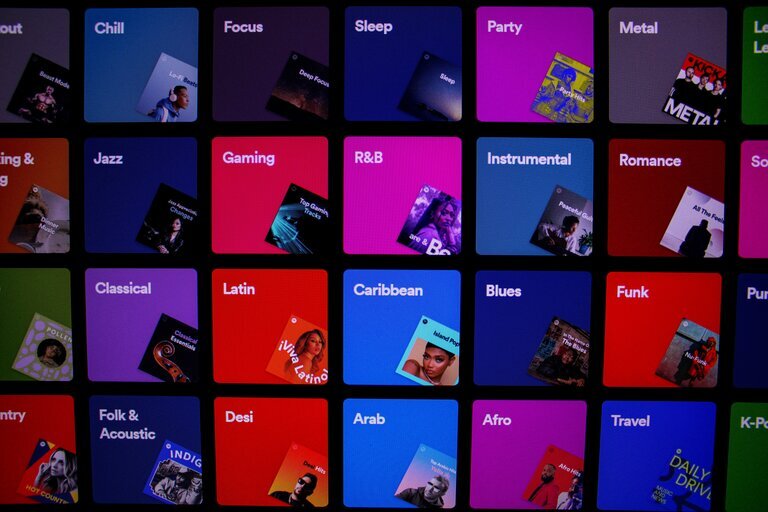 The power of playlists

Playlists aren’t a new concept – mixtapes have been around for ages at this point. What is new, however, is how artists can utilize them to cut through the release clutter, getting their music heard by new potential fans around the world. A mixtape was a personal creation, but a playlist can be an infinitely shareable gateway to new music.

The fact is, you’re much more likely to get your stuff heard if you have tracks that are featured on playlists. Obviously, popular ones will net you more listens and potential fans — but smaller, niche playlists can be more accessible, with listeners that are pre-aligned to your style.

Why do you want to get your music on playlists?

Most people, when faced with a choice of randomly selecting an album they've never listened to before, by an artist they've never even heard of; or listening to a playlist that's full of songs tailor-made for their tastes, will go with the latter.

Even if a playlist is rife with music you don’t recognize, it’s like a sample platter of lots of potential new favourites. You don’t have to commit like you would if you're trying out a whole new album/artist blindly, plus you already know what the mix is themed around. If you can get your music in playlists, more people are going to give you a chance to entertain their eardrums. If you simply release music into the void, people are less likely to discover it.

Playlists and their popularity

All it takes is a quick glance at Spotify’s homepage to see just how much playlists are prioritized:

Playlists are the perfect tool for sites like Spotify. Their internal content curators can create playlists to quickly capitalize on new trends. External partners, like Filtr UK who made the ones in the above picture, are also creating new playlists all the time for hundreds of thousands of followers. On a smaller scale, influencers like popular music YouTubers or Twitter accounts have fans ready to hop onto new favorites and discoveries.

Even huge artists utilize playlists to their maximum potential. It’s common for an artist’s ‘Best of’ playlist to be updated upon an album release, even though no reviews or feedback have yet rated the new tracks. Here’s an example where rock band Rammstein boosted their 2019 singles by adding them into a popular playlist:

Not all playlists are made equal

As we’ve mentioned, playlists vary in size, genre, purpose, and so on. Here are a few of the most popular kinds – start thinking which make sense for your own music:

These are Spotify’s own playlists. Their team of music experts are always updating and uploading mixes, spanning every conceivable genre and/or purpose. Check out this section later in the article, where we break down how to get into these playlists!

This is where one specific person acts as a curator of the playlist. If you can get your music noticed (and liked!) by the right people, there’s a good chance they’ll have a playlist where it could be featured. A good example is Frank Furtado, who runs the YouTube channel Middle 8. People who enjoy Middle 8 video essays are also likely to check out their Spotify playlists, which the creator plugs on their Twitter and YouTube.

If you look at any artist on Spotify, you’ll usually see two headings among their albums and singles, etc. ‘Featuring [artist]’ compiles popular playlists where the artist is featured, as the name suggests. ‘Artist Playlists’ are playlists curated by the artists themselves – usually collections of music they like, self-appointed ‘Best of’s, their influences, and so on. Sometimes artists collaborate on these playlists, which is worth pursuing if you know fellow artists that have similar interests.

Record labels are always looking to promote the music they manage, so naturally they utilize a lot of Spotify playlists to help do so. They are, however, entirely exclusive to music published under the label,  so sending in your music may be a little fruitless. Still, it just shows that the traditional route has become modernized via Spotify - and it’s also a route you can go down if you’re looking for a label to apply to!

These are what they say on the tin. Anyone with a Spotify account can make playlists, and that’s what personal playlists are! Naturally, you can’t really apply to these, but as your popularity grows, you’ll get data on how people are using your music with their own curations. Sometimes, these become super popular – especially if the playlister in question becomes an influencer, or their playlist is picked up by Spotify’s algorithms.

Even the most organic, genuine-looking playlist could be susceptible to some under-the-hood manipulation. As playlists become more popular, so do the chances of people paying their way into them. Pay-for-feature playlisting is an open secret, and a way to get some listeners, but can be expensive, ineffective, or worthless if the playlist declines in popularity. Always go with a legitimate group offering this service, and try other methods before going down the route.

Getting on an editorial playlist

What is the Pitching Process with Spotify?

Pitching is all done via Spotify for Artists, an app you’ll be familiar with if you’ve already begun putting your music on Spotify. If you’re not familiar, make sure to check it out on Android, iOS or via the web. It’s great for seeing stats, managing your artist profile, and getting onto editorial playlists!

The pitching process itself is quite simple, and split into two halves: music that’s already released, and upcoming releases.

If you already have tracks published on Spotify, you can apply for them to be featured on various playlists that Spotify curates. The tips in this article can be used for these styles of release.

If you have content scheduled for release, this is where playlists can truly help it gain traction. Spotify is renowned for playlists like Release Radar and New Music, and this is how you get onto them. Make sure you begin the process with plenty of time, so the Spotify team has a chance to check out your pitch before release. We’ll focus on this category of music as it’s the best way to utilize playlists.

The pitching process itself is as follows:

You can edit your pitch right up until the day of the release, but the editors may not see the changes.

What are the rules to pitching?

The main one is to be honest – don’t lie or mislead when setting your tags or describing the track. It sounds simple, but even a small exaggeration could disappoint and then turn an editor off from your music.

What makes a good pitch?

Follow the steps mentioned above, and you’ll have a good pitch. Be as informative and honest as possible, then let the music you’ve created truly shine. Even if your music isn’t selected for the playlist, that doesn’t mean it’s not good enough or you made a bad pitch; just keep trying!

What happens to your pitch once you submit it?

Ultimately, your track will either be used or it won’t. You’ll know if it gets picked - not only will you receive an email, but you’ll also be able to view more info under the Playlists section of your Spotify for Artists account. A track that doesn’t get picked initially may still be used in the future, so keep that in mind.

Note: an editor may opt to pick another track from your release, even if you pitched a different track. Don’t be alarmed, as it’s a good thing; your music struck a chord with Spotify, and they explored it further!

Getting on Non-Editorial Playlists

Spotify isn’t the only entity creating, curating and promoting playlists. Throughout this article, we’ve mentioned other types of playlists, and many of them are accessible to you and your music.

This is a completely different process, and varies depending on exactly what you’re after. Some institutions have their own application scheme similar to Spotify, whereas others rely on social media or word of mouth.

How do you get playlist curators to pay attention to your music?

Well, that is the all important question! A direct approach is usually worthwhile, but notable curators will be getting loads of these, all of the time. Standing out from the crowd is easier said than done, so ensure you’re genuine in your approach. A few quick tips:

So, there you have it. Getting on Spotify editorial playlists isn’t easy, but if you do manage to get there the rewards can be substantial. Even if you’re not able to get on editorial playlists, we’ve shown in this article that there are other types of playlists that you can get your music on, and hopefully get new ears on your music in the process! Remember, there are tens of thousands of tracks being uploaded on Spotify every single day, so don’t be discouraged if your music doesn’t end up on any playlists. Keep making music!