Music production has evolved rapidly since the turn of the millennium, partly due to the widespread accessibility of production equipment, as well as that seemingly endless bank of information and resources at our fingertips called the internet. Although new ground in music production is broken nearly every day, many genres still rely on deep-rooted techniques that have been passed down through the ages, and hip hop is no exception. 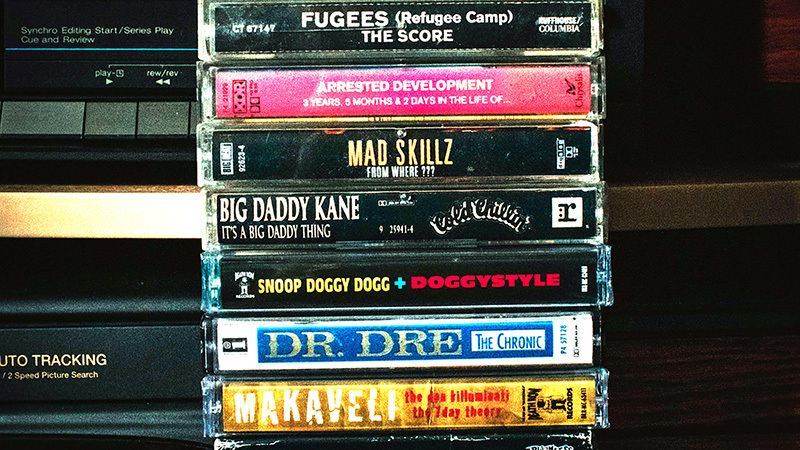 Whether we see the preservation of old-school hip-hop production techniques as an ode to pioneers' past or simply evidence of how ingrained they are within the very DNA of the genre, it’s clear that they still serve a purpose. Fortunately, modern music software has made it easier than ever to take these tricks of the trade into the modern age, while still preserving their original character. Here are some ways you can use Loopcloud to get your track bumping like a hip-hop classic.

Back in the 70s and 80s, DJs would remix records live with skilful vinyl manipulation. This set in motion a music revolution that brought about hip hop’s culture of borrowing from the past, or sampling. Long since released records were repurposed and reimagined, with innovative young producers snipping out vocals, drums or even full sections of the track for their own needs. 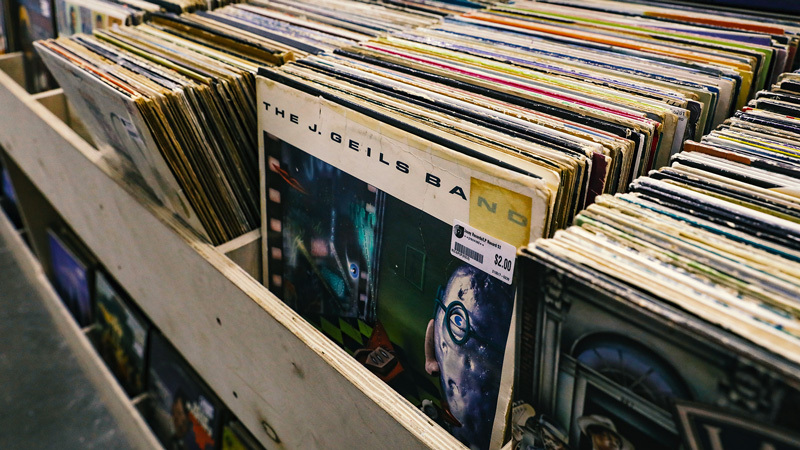 Collections help you to find your sounds faster with specially curated playlists from artists and the Loopcloud community. Just imagine how much space the crate diggers of the past could have saved if they didn’t need to have a place to store all of their vinyl!

A technique that became popular in hip hop during the mid to late nineties, pitch shifting actually has its roots at the tail end of the fifties, after Ross Bagdasarian experimented with the speed controls on a tape deck to get high pitched vocals. For better or for worse, Alvin and the Chipmunks were born, and a new production technique arrived that would go on to be refined with the help of digital samplers like the Akai S1000.

A lot of hip hop is inspired by or directly borrows from older forms of soul and R&B. Given that soul and R&B are typically slower genres, hip hop artists who wanted to get soul samples to an appropriate speed distorted the samples they were using and rendered them to a new pitch. Wu-Tang Clan’s RZA is often credited with being one of the earliest adopters of this production technique in hip hop.

Another classic example of this technique being used is in ‘Shook Ones pt. 2’ by Mobb Deep. By sampling Herbie Hancock’s ‘Jessica’ and pitch-shifting it downwards, Mobb Deep were able to create a new piece of music that is totally unique and unrecognisable from the original. You can also hear widespread use of high-pitched soul vocal sampling in Kanye West’s debut album, The College Dropout, a technique that became somewhat of a calling card for him in his early career.

With today’s production tools we’re able to manipulate both the pitch and BPM independently of one another thanks to warping. In Loopcloud, this is a simple process that will deliver you instant results. After selecting a sample, slide the Pitch knob to the right to pitch the sample up, or to the left to pitch it down. You can click the OCT button to transpose the sample up or down a full octave.

Putting it in reverse

Sample reversing has been a hip hop staple for many years. A reversed instrument sample can create an unusual sound that will make your track stand out, while also sounding unrecognisable from the original sample. With copyright being a huge issue when sampling popular records, reversing your sample was a great way of flipping a record while staying off the radar of the record labels and publishing companies that would come calling for their splits otherwise.

Hip hop quartet The Pharcyde were known for their eccentric musical sensibilities and unique take on hip hop in the nineties, and employed sample reversal to good effect on a number of their tracks. Their song ‘Drop’, produced by none other than Detroit’s own J Dilla, features a reversed synth sound, and they even recorded the music video backwards to match the warped sound of the record’s instrumental backing.

In Loopcloud, reversing a sample couldn’t be easier. All you have to do is load up a sound and then click the Reverse tool under Tools in order to flip your sample back to front. If you want to reverse only a section of the sample, slice it with the Split tool first, and then reverse the newly formed section. To make the reversed part run into your original sample, you’ll need to make sure the transients meet each other at the correct point.

Originally, DJs would loop full drum breaks to remix their favourite records for others to rap over and dance to, but as time went on and sampling technology hit the scene, producers were soon able to chop up tracks into what we now call ‘one-shots’. These one-shots could be from any section of the track, which allowed for creative repurposing of sounds, and then assigned to pads on your sampler of choice. Once you had fashioned a kit on your sampler, you were free to start cooking up your own fresh beats.

There are almost too many examples of chopped up and sampled drums in hip hop, but one example of a legendary drum break that has been used throughout the ages, is ‘Funky Drummer’ played by Clyde Stubblefield for the James Brown Band.

With Loopcloud, you can find ready-made drum samples in our library of over four million sounds, and add them to a sampler or drum kit within your DAW. You can even chop up longer drum loops using Loopcloud’s FX Editor. The best way of adding beats to your tracks though is Loopcloud DRUM, which offers a range of drum kits from artists and producers, conveniently laid out across the plugin's 16-pad sampler. There are also a host of options for customising and building your own kits, and you can choose to use samples from either your own library or the Loopcloud catalogue. 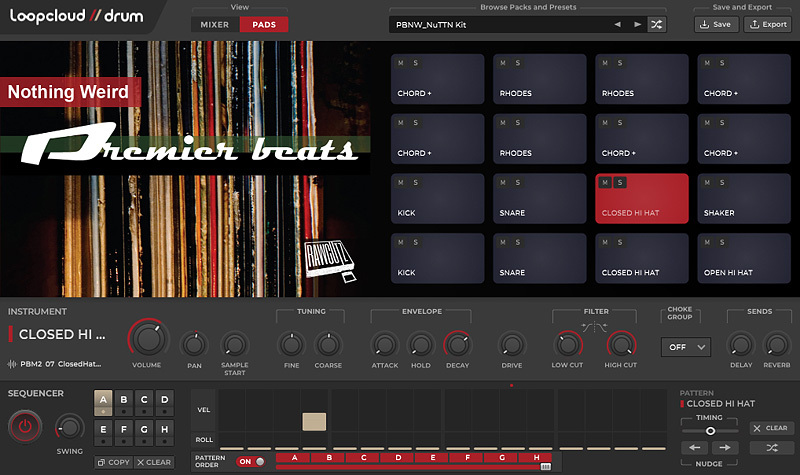 Quantization is a dirty word in the hip hop community, as while it definitely has its uses, relying on it too much can often result in your drum loops feeling robotic and lifeless. Hip hop, like jazz and blues, uses ‘swung’ eighth notes as the base for its rhythms. Often, only one element of the drum track, like the bass drum, is swung while the other components are played straight. The swung hits then imply that the other elements are similarly off the beat.

Pretty much all of J Dilla’s beats have a swung feel to them, but a good example of this type of rhythm is in ‘R U Listenin’?’ from his debut album Yancey Boys. Notice how every other hi-hat is a little late, giving the beat a bounce that is characteristic of classic hip hop records. For more tips on using swing in your music, check out our guide to the topic here.

If you’re struggling to record your drum patterns with a swing feel, don’t worry. Loopcloud DRUM has a swing function which allows you to dial in the right amount of swing for your drum track. You can also achieve a similar effect by slightly nudging your drum hits to the left of right, to really lock in the groove.

The vinyl scratch sound, caused by DJs rhythmically wiggling the records on their turntables back and forth, is synonymous with early hip hop records. Scratching was developed by early hip-hop DJs from New York, with a basic equipment setup including two turntables, and a mixer with a crossfader and cue buttons. When scratching, the crossfader was used to cut in and out of the scratched record.

You can hear this technique being employed on Pete Rock’s ‘Soul Brother #1’, from his classic Soul Survivor album, or further back, on Grandmaster Flash’s masterpiece ‘The Adventures of Grandmaster Flash On the Wheels of Steel’ from 1981.

Here’s how you can achieve this effect using Loopcloud’s FX Editor. First you need to load up the sample that you want to scratch over, then click FX Edit to open up the effects section. You can add a scratch effect by using the Aggressive scratching preset from the Delay section. Edit the automation lines on your sample below to create realistic scratches. Try it out and see what you can come up with!

The techniques we’ve mentioned today are simply a few of the tricks of the trade for producing old-school hip hop, demonstrated through the use of the Loopcloud and our 16-pad sampler and sequencer DRUM. Don’t stop there though! If you love your classic hip hop, try out Loopcloud today and see what production techniques you can emulate using the modern creative tools within.