FeaturesPlugin SuitePlansTutorialsBlogSounds
What makes a great Kick drum? Kick drum patterns and sonics explained
15 Feb '2022
We take a look at how kick drum sounds and patterns vary across different genres of music.

To the untrained ear, a kick drum can, to all intents and purposes, sound like any other kick drum. However, as with almost all aspects of electronic music, the deeper you dig into a topic, the more there is to learn. Spend a bit of time analysing kick drums across different genres, artists, and decades and you’ll soon realise that the sound of a kick drum can vary wildly, and be deployed in all sorts of ways. In this article, we’ll discuss how kick drums are used in different genres of music, and how you can use them in your own tracks.

The character of a kick drum can be a defining element of the sound of a track. Though kick drum design can get as complex as you like, at its core a kick drum can be broken down into three elements: attack, body and tail. To learn more check out this video from Sol State.

For example, techno tracks such as Asquith's Enter the Core will often have a loud, bass heavy, long tail that actually fulfills the role of a bassline in the track.

Club-focused tracks like this one require a lot of bass energy, as they’re played out on massive sound systems and provide the sonic fuel for people to keep dancing all night. This can either come from a bass element, or from a bass-heavy kick drum, as is the case in this example.

Here an aggressive, bass-heavy techno kick would be very out of place, so instead Coombe Harbor has opted for a short, more percussive kick which has a prominent, mid frequency attack transient and a very short tail. This style of kick pops through the mix and will be fully audible on all sound systems ranging from club speakers to your mobile phone.

Kicks that have a prominent body are often found in genres such as UKG and other UK bass-related genres, where short drum samples are used in more complex, heavily swung grooves in combination with bass-heavy basslines. Here the kick drums hit you in the chest, they almost feel more like a ‘knock’ and are often a rhythmic respite from an in-your-face bass element. You can hear this in action in Nikki Nair’s Justtryingto:

Do you need to tune your kick drum? It’s a question that gets raised a lot and unfortunately, there is no set answer - it really depends on your track, and your personal preference.

In the previously mentioned instance of Asquith's Enter The Core, where the kick drum is the main bass element, it would be a good idea to tune the kick drum. If your kick has a long sub tail then this pitched content will be a prominent harmonic element in your mix, and you want it to gel well with other melodic elements such as keys and synths.

However, in the instance of Post Office Bay by Coombe Harbour – where the kick is more of a purely percussive element - tuning is not as important. As the kick sample is short and mainly made up of the attack section of the kick, you’re unlikely to get much harmonic dissonance between the kick and other elements of the track.

That being said, no matter what type of kick you’re using you can always use tuning as a sound design tool. Though you may not need to retune your kick, changing the pitch of any sample can change its character and is always worth experimenting with.

Effects are one of the primary tools available to music producers when altering the characteristics of a kick drum. Here are a few examples of how effects can be utilised in your drum design workflow.

Our number one piece of advice when it comes to drum processing is to distort your drums. Even if you make gentler styles of music, adding distortion and saturation will be incredibly beneficial. 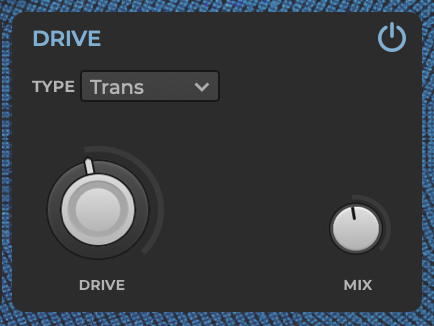 Distorting drums isn’t about making them sound ‘hard’ or ‘big’; you can apply gentle saturation to bring out harmonics in the kick’s sound which fills up the sonic spectrum and helps your drum hits pop.

In Loopcloud DRUM this is easily achieved by cranking up the drive master effect. You can then get the right balance with the Dry/Wet knob.

If you’re working in genres such as IDM and you want a clicky, more transient focused kick - bit crushers are your new best friend. You can use the Crush effect in Loopcloud DRUM to achieve this sound. Loop your kick and bring the bit depth down to around 8 bits, and then slowly bring the Sample Rate down. You’ll start to notice pleasant digital harmonics sparkling at the top end of the midrange frequency spectrum. Who knew kick drums could sound so pretty? 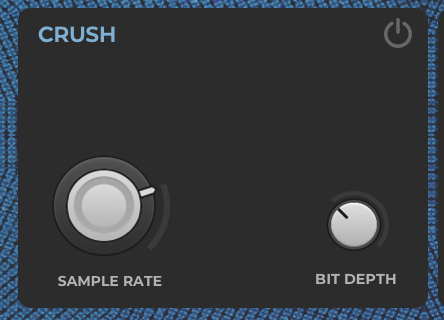 Now, you may have heard the mantra that you shouldn't add reverb to kick drums, and as a general rule of thumb that is true, but there are instances where it can be an interesting textural technique – you just have to do it right.

Reverb on your kick can help you create big, industrial techno-style, cavernous kick patterns. It works particularly well if you have a sparse arrangement so that the reverb is reducing the clarity of other elements.

One of the key things to remember is to filter out the bass frequencies in the wet reverb signal. If you don’t do this, bassy reverb tails can quickly make your mix muddy. Instead you want to keep the mid and upper frequencies in your reverb tail to add character, but not boxiness to your kick.

Kick patterns are a surprisingly interesting subject, it’s incredible how a simple thing like where in the bar your kick plays can totally transform the feel of a track.

Take house, dubstep, drum and bass, trap, garage as examples; though these genres are not defined by the kick placement in their drum patterns, the kick is an essential constituent element of the song.

With this in mind let’s look at a few classic genre kick patterns.

One of house music’s key characteristics is its constant four-on-the-floor pattern. What do we mean by four-on-the-floor? Essentially all it is is a kick drum on every quarter note of the bar, it’s that ‘untz, untz, untz’ you hear in club main rooms around the world.

You can see how this pattern looks in Loopcloud DRUM in the above image. You’ll also hear this style of kick in techno music, which is very closely related to house.

Though drum and bass is a much faster genre than house music, it has a more sparse kick placement that’s defined by its relationship with break beats, specifically the amen break.

Trap and other sub-genres of hip hop don’t have set kick patterns that you hear reproduced identically over and over. However, kick patterns in hip hop are often quite similar stylistically. Below you’ll find an example of a hip hop kick pattern – notice how we’ve varied the velocity of each kick hit to add a human feel to the beat. 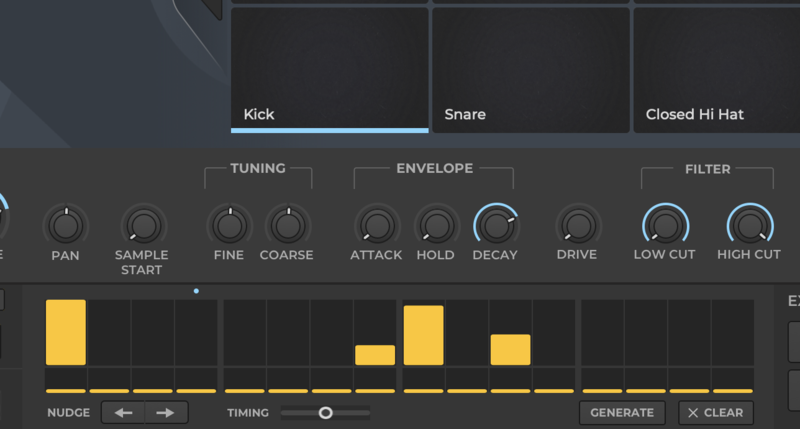 Kicks in hip hop tend to imitate the style of kick placements you’ll find in classic soul and funk records that early hip hop producers used as sample material. Listen to a few tracks and take note of where the kicks fall; though they won’t be identical you should start to notice a stylistic similarity.

A final consideration when it comes to kick production is EQing. EQing can seem like a bit of a mystical art form at times, but there are a few simple rules you can follow to help your kicks stand out. Don't forget, you can make EQing easy with Loopcloud's FX editor.

The first thing you want to do to your kicks is to roll off the very lowest frequencies. Audio under 30Hz is pretty much inaudible to human ears, so there’s no point in it being in your mix. All it does is eat up headroom, and it can end up churning up the rest of your mix when it comes out of bigger sound systems that can actually reproduce those super-sub frequencies.

Another useful tip when it comes to EQing kicks is to carve out space for your bassline. Balancing kick and bass channels is always a challenge for producers as both elements occupy a lot of sub space. However, it is very unlikely that they will occupy exactly the same sub frequencies, which means you can cut out some space on your kick drum channel where the bass is prominent, and vice versa on the bass channel. If the two elements do occupy the same frequency space, it might be worth picking a different kick or bass sound.

So, next time you sit down to do some drum programming, we hope you’ll bring in some of the kick drum knowledge we’ve shared with you today. You can play around with kick drum sounds and patterns on Loopcloud DRUM, which has a set of easy-to-use controls for each sample that you’ve loaded into the pads. If you need further help on how to create great drum patterns in the style of your favourite genres and producers, check out our ‘3 Minute Beat’ videos for clear and concise tutorials.