Welcome to Loop+! This is your starting point for finding out how to get the most out of your Loopmasters samples. Browse our selection of tutorials covering a range of topics from popular DAW tips, fundamental studio techniques, basic music theory tutorials, promoting your music, and making the most of your audio plugins. We hope you enjoy!
Loop+ / Studio / DAW Tutorials / Reason

Making Use Of Recycle Integration

Far beyond the simple sampling that first appeared in hardware, slicing, re-timing, and stretching audio keeps getting more sophisticated, manipulating recorded sound in musical ways. But a lot of the popularity of this technique traces back to Propellerhead and their ReCycle tool. By bringing together smart digital slicing with its REX file format for loops, ReCycle helped launch the looping craze in software. In this Reason 7  tutorial we look at how the integration of Recycle with their excellent time-stretching creates new work flow options. 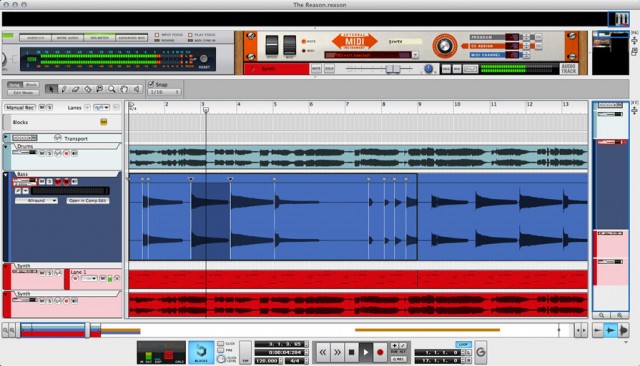 It slices! It dices! No, really – it does. Finally, you don’t have to leave Reason to prep samples and loops or re-time recorded sound.

REX support has always been part of Reason, since the start. But the way sound works in Reason has gradually evolved, particularly as Swedish developers Propellerhead made Reason into less of a rack of synths and more of a full production environment. Bringing integrated recording, live sampling, and time stretching into the mix, literally, meant that you might go directly from a mic into an instrument.

And that brings us to Reason 7. If you want to do your own sampling work, you probably want the ability to have everything happen inside Reason rather than rely on an external tool like ReCycle. Propellerhead certainly kept you waiting for the chance to do that, but in typical form, they’ve also got their own way of going about it.

Let’s hear what they have to say.

It just made sense!

What we’ve done in Reason isn’t exactly ReCycle though. It’s a combination of our amazing time stretch now being used for audio slicing, too, and the added ability for Reason to create REX files. We haven’t actually integrated ReCycle and Reason. We have given Reason 7 the ability to convert audio into REX loops, but that happens completely independent of ReCycle! It’s a feature available to all Reason 7 users, natively in Reason 7.

The focus for the implementation in Reason is to make it fast and easy so you can quickly get a recording or imported audio file from the sequencer into Dr. Octo Rex, the NN-XT sampler or Kong drum designer and continue working creatively with it in the rack. Think of ReCycle as an “editor” and Reason as a music-making program and you get a pretty good idea of how the implementations differ.

ReCycle still remains as a standalone tool, and for those who use other programs than Reason for their music-making, create sample libraries or just want the control that ReCycle brings (like threshold for slice-creation, stretch amount, and more) it’s great for that. As an example, about half of the current ReCycle user base are not Reason users — they use ReCycle to create REX files for other programs, like Live or Logic, or Stylus RMX, or are sample library creators who will need the added control that ReCycle gives.

For most of us, though, Reason’s REX file implementation will do everything we’ll ever need, without interrupting the workflow. The automatic slicing is really accurate, and twisting your recordings into something new is a lot of fun!

What’s different about it?

The REX file creation is one puzzle piece in the improved audio handling in Reason’s sequencer! Reason 7 now instantly analyzes any recorded or imported audio, finds the transients and adds slices to it. This opens up for quantizing, stretching the individual slices, or bouncing the audio to a REX file. The slice detection is very accurate, and the slice stretching uses the same time stretch algorithms as we already have for full tracks in Reason, which we know is of extremely high quality, so you can trust that your songs will still sound great. So really, when we’re talking about stretch, there’s both the classic ReCycle type stretch of increasing the space between the slices when you’re using REX files, and our modern time stretch that actually stretches the audio.

For the user, this means that recordings or imported audio files can be worked with in a number of new creative ways. You can change the timing, change the tempo, make the recording “better” (tighter) or groovier. And then when you’re happy with it, put it in a REX player in the rack to play the slices from a keyboard, rearrange the performance live and even put effects on the individual slices in Kong.

What sorts of workflows might people use with this integrated functionality, as far as sampling, slicing, recording in different contexts?

Re-sampling is of course a big concept in electronic music-making today. Being able to take your re-sampled sounds directly into a REX player in Reason opens up a ton of new possibilities.

Recording something, instantly have it sliced and ready to throw into a REX player means you can hammer out beats and work creatively with your recordings with just a few mouse clicks.

It really is about taking down the barriers between the rack and the sequencer in Reason, and open up for more creative possibilities with audio.

Tutorial: How to get going

So, that’s the rationale, some clarification, and the marketing pitch. If you’re grabbing Reason 7, though, you’ll want to know how to get working.

Product specialist Mattias produced a tutorial video on slice markers and the newly-integrated functionality, and includes a number of useful tips:

So, what do you think? Is this something you’ll use? Are you sticking to a different tool of choice, or excited to see this in Reason?

Via comments, it appears some people are confused about how the drag-and-drop sample loading workflow actually … works.

1. Drag the desired .wav from browser in Explorer to Reason 7 [Ed.: or any other supported format, or from OS X Finder]

How to Use The Echo As A Distortion Device

How To Create a Techno Kick Reverb Effect

How To Create A Hip Hop Combinator